S2E2 - French: What You Should Know When Localizing for the French-Speaking Audience 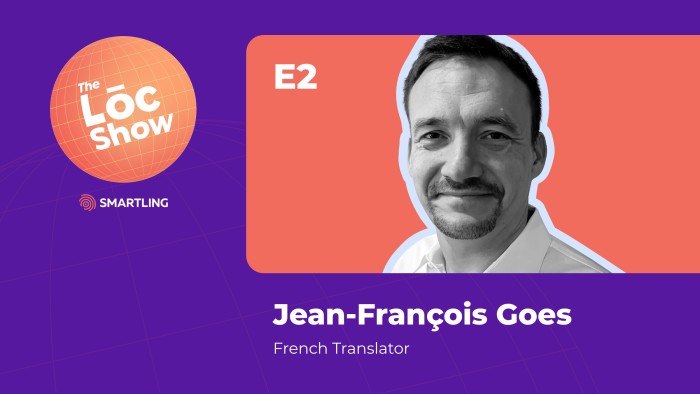 Jean-François is an expert French linguist and translator with 22 years of experience. Now based in New York, Jean-François was born in France and lived in Dublin before moving to the US. He has worked with agencies and been a team lead on localization projects, and he transitioned into working as a freelancer translator about 16 years ago. Jean-François will be discussing the challenges of translating French into English and what we should know when localizing for the French-speaking audience.

Jump into the episode
[02:27] About Jean-François and his translation background.
[03:24] Jean-François’ past experiences with Smartling and his appearance in the book ‘Move the World with Words.’
[05:00] A brief introduction to the French language and its prevalence.
[05:25] The differences between Canadian French and traditional French.
[06:57] What a typical workday and translation process looks like for Jean-François.
[07:30] How starting his day by running has allowed for more thinking time before the day truly starts.
[08:45] Why being a translator is more than just speaking multiple languages.
[09:20] The rewards of seeing how your translation helps others.
[10:43] Some of the biggest challenges when translating English to French.
[11:40] Why context is key in translation.
[13:00] Some words that are challenging to translate.
[14:50] Improving inclusivity in French translation.
[16:55] The biggest cultural differences when targeting a French-speaking audience.
[19:25] What Jean-François would ask project managers to do to make his translating jobs more efficient.
[21:00] Why translating word for word loses meaning.
[21:50] Jean-François’ final thoughts translating English <> French.

Interested in receiving email notifications when a new podcast goes live? Be sure to subscribe to our newsletter!