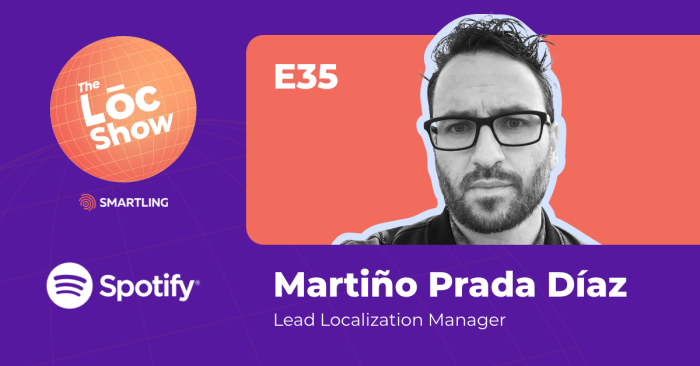 Martiño Prada Díaz is the Localization Manager at Spotify, a music streaming platform that allows instant access to thousands of artists and millions of songs and podcasts across the globe. Originally from Spain and now in New York, Martiño has lived all over the world. In the States for 11 years, he moved to New York in January 2020 to start his job at Spotify. As a literature, linguistics, and movie buff, Martiño found that his location growing up was limiting to his opportunities and began to look elsewhere. His personal interest in how translation works led him to a master’s degree in Translation and Linguistics, which led to his first job as a translator in a small agency. Soon, Martiño was undertaking a Ph.D. in Translation and linguistics to further his knowledge. Having worked at GoPro, Netflix, and now Spotify, Martiño makes it a point to work for companies that make a difference to people. Martiño discusses his varied career and the challenges of localization in a rapidly growing company.

Jump into the podcast

[01:33] About Martiño, his background, and his extensive travel.
[05:59] Martino’s beginning in the language sector.
[09:15] How bad translations in video games led Martino to discover localization.
[12:25] Martiño’s experience working as a translator and how it informs his current job.
[14:50] How Martiño creates empowerment for his clients and his team through localization.
[16:40] What draws Martiño to a company and a position.
[19:05] Localization challenges at a rapidly growing company.
[23:58] What content goes through the localization pipeline at Spotify.
[25:50] The main challenges of increased translation volumes and how to tackle them.
[30:34] Showing localization ROI.
[35:40] The future of localization at Spotify, and for Martiño.

Get to know Martiño and Spotify