Growing up in sales and parenthood 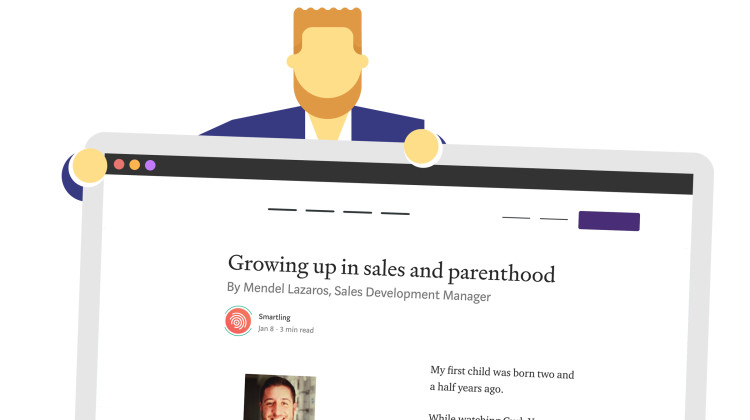 My first child was born two and a half years ago.

While watching Curb Your Enthusiasm, Ariella and I timed contractions until my wife’s water broke. We hopped into a yellow cab to make the journey across Central Park to Mount Sinai Hospital. At 9:34 am we welcomed Margot into the world.

Three hours later, I had my first interview with Smartling. I was asked how my day is going, and I replied in a somewhat groggy yet enthusiastic voice, “Fantastic! I just became a father.” “And you’re on the phone now?” the HR Coordinator, Ruhee, asked. “That’s how badly I want this job,” I replied. My first day at Smartling was three weeks later.

For 21 months I worked through sweat and tears as a new father and as a Sales Development Representative (SDR). Cold calling and diapering. LinkedIn InMailing and burping. Mailing and swaddling. I watched Margot take her first steps and turn into a lovable toddler. I saw my cold emails turn into customers. My first customer was a B2B SaaS company that was later acquired by Salesforce. Then a consumer eCommerce brand that reinvented how luxury goods could be marketed and sold online around the world. It was rewarding to see these companies mature so quickly. I take pride in having played a tiny role in their success.

In April, I got promoted to Account Executive. What I quickly learned as an AE is that it’s less about the number of emails sent and more about the average number of days it takes for prospects to become customers. Success isn’t measured in meetings held but in product and professional service dollars sold. As an AE, my first deal was with Glint, a B2B SaaS application that was recently acquired by LinkedIn. TaskRabbit, my fourth customer, is a consumer facing mobile app that was acquired by IKEA.

One aspect of Smartling that I love is in the diverse set of customers we help. Regardless of industry, there’s no room to doubt the power of Smartling’s platform and language services, helping customers to localize every touchpoint throughout the customer journey, whether that be marketing websites, emails, legal contracts, web applications, eCommerce SKUs, support articles, or mobile apps. What’s more is that I am a consumer of at least 10 of Smartling’s customers.

About a year ago, things were running smoothly at work when I heard a nervous call from my wife when I was in the kitchen. “Mendel!” We were pregnant again. It was at this point two thoughts went through my head: “WAHOOO” and “we’re going to need a bigger apartment!”

Nine months later, I flipped on my office auto-reply. I’d be back to closing deals in time for Thanksgiving, I thought.

When my wife and I welcomed Sarina into the world, I became outnumbered by the women in our apartment 3:1. It’s been an absolute joy. I’m proud of Ariella for raising two beautiful children, proud of Margot for speaking so eloquently in school, and proud of Sarina for holding her head up herself. Without Smartling’s generous paternity leave policy, I wouldn’t have had the opportunity to spend so much time with my family — for this, I will always be grateful.

I’m also grateful for the new opportunity that Smartling offered me upon my return: to serve as the company’s SDR Manager for North America. I jumped on this opportunity because I love working with, and nurturing sales people. We also have a great team — in fact, we’re hiring and you should join us!

For me, 2018 was a whirlwind of career and personal growth. 2019 is already off to a fantastic start, too. Celebrating these accomplishments with my customers, colleagues, and my family makes it all worthwhile.

Mendel Lazaros is Sales Development Manager at Smartling. Mr. Lazaros is pursuing a Master’s degree at Columbia University’s School of Professional Studies with a focus on Technology Management. In his spare time, Mr. Lazaros also co-directs the Youth Department for Lincoln Square Synagogue in New York City. Mr. Lazaros lives in New York with his wife Ariella, and is the proud father to two little girls, Margot and Sarina.