How One Translator Uses Technology to Travel Back in Time

An inside look at the life of Daniel, a freelance translator who lives in a rural village in Asturias, Spain. 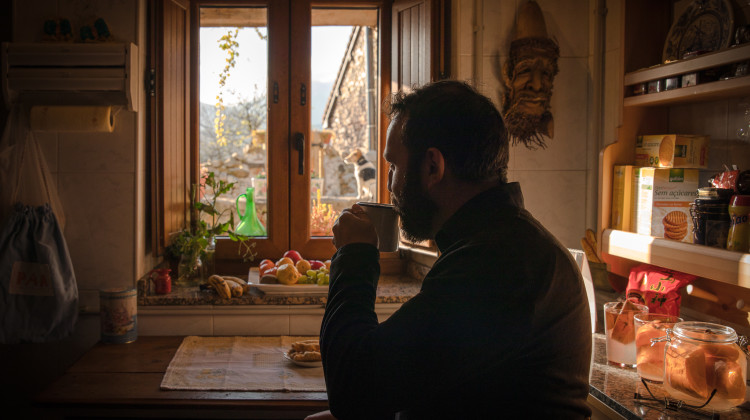 By Elisabeth Brentano for Smartling

As part of Smartling's Move the World with Words campaign, we're traveling across the globe to create a photo series about ten of our freelance translators. We want to give you a glimpse into their daily lives, and share their thoughts on language and communication in the digital age. We've teamed up with photographer/writer Elisabeth Brentano to capture these brilliant translators in their element, and our first profile is on Daniel, who lives in a remote village near Oviedo, Spain. 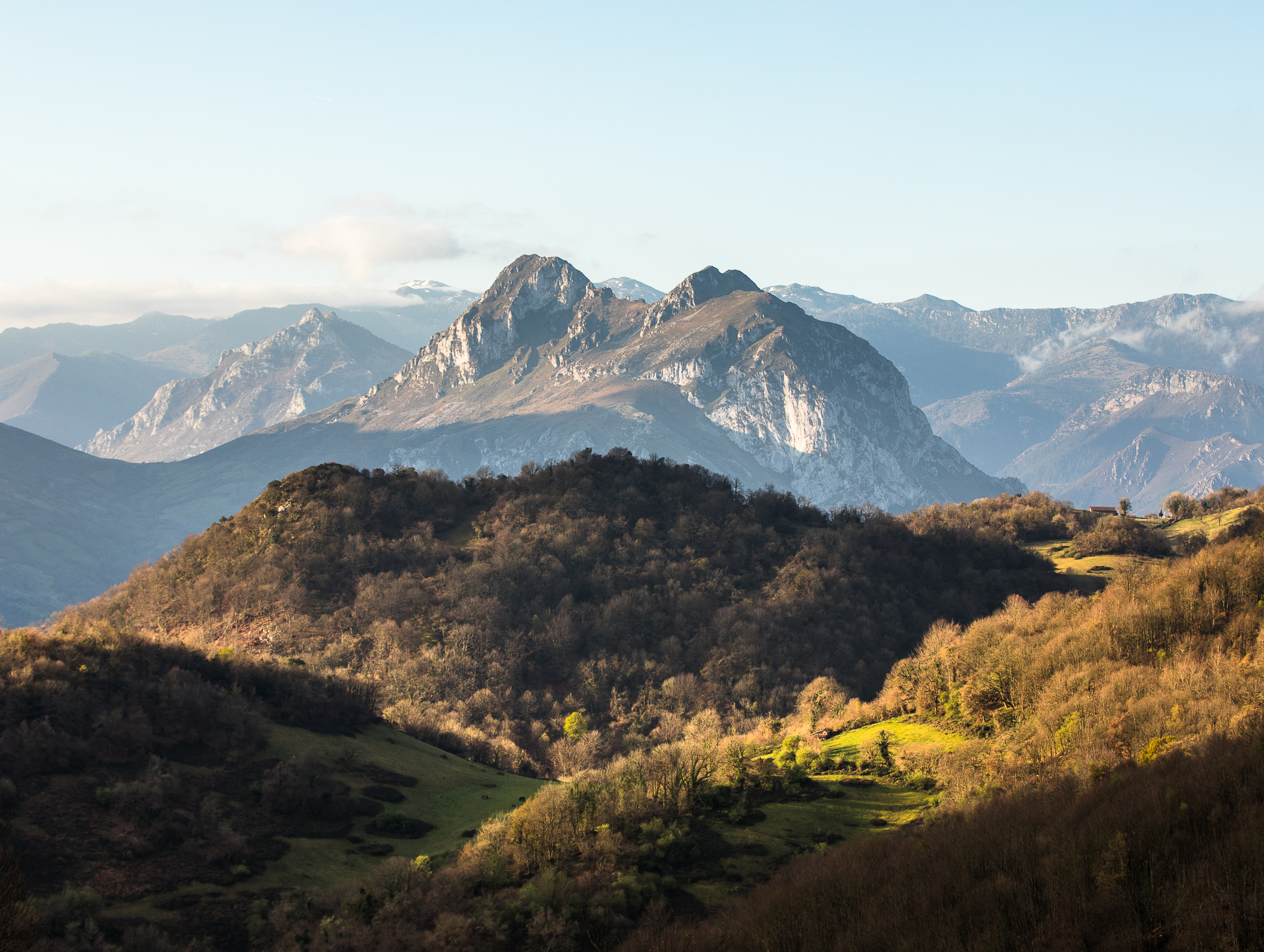 Spring in Spain was everything I dreamed it would be, and the first few people I met after landing in Asturias were just as welcoming as the weather. My taxi driver proudly told me about the cider in the region, and when the snow-capped mountains finally came into view, my jaw was on the floor. As I walked along the river near my hotel that evening, I heard cowbells in the distance and noticed a castle peeking through the trees. It truly felt like I had traveled back at least a century or two, and life here seemed like something straight out of a fairytale.

I send Daniel a WhatsApp message asking where we should meet the following morning. "If your taxi can drop you off at the bridge (puente) in town, I'll pick you up there." I'm glad he mentions "puente," because that is one Spanish vocabulary word I had clearly forgotten. I find the bridge on Google Maps, but I also wonder why Daniel hasn't given me his actual address. Seeing as he lives somewhere with WiFi and cell service, surely it won't be that difficult to get to his house, right? 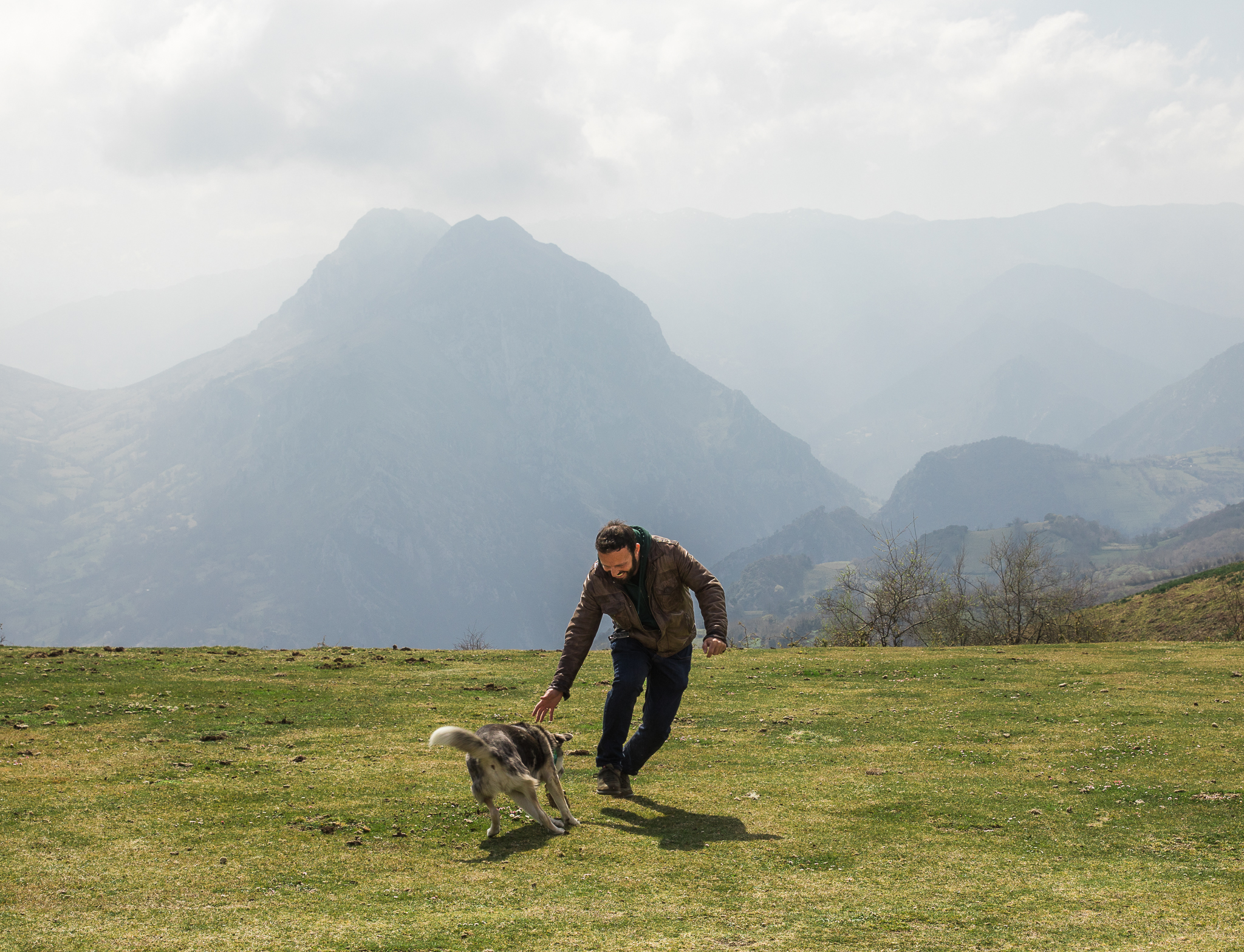 Just two minutes after hopping in Daniel's car, I begin to see why he suggested the drop-off point in town -- and why he lives in this rural paradise. As we snake our way up a one-way road to Daniel's cottage, we pass by verdant hills dotted with cows and sheep, while the craggy peaks of the Sierra del Aramo loom in the distance. The population ranges from 15 people in the winter to about 50 people during the warmer months, but thanks to the local government investing in high-speed internet a few years ago, it's not nearly as remote as you might think. But, then again, maybe it is. Every season the farmers lose livestock to wolves, and Daniel tells me that a few years ago a few bears destroyed the honey farm we just passed by. Daniel's wife Leah and their dog Bowie greet me at the same time, and I'm impressed that the two-year-old Leonese Shepherd responds to commands in both English and Spanish. Leah is from the U.K. and she also telecommutes, and while the couple are well-traveled, these days they prefer exploring local spots. "We've lived here for two years, and we're still discovering new places," Daniel says. 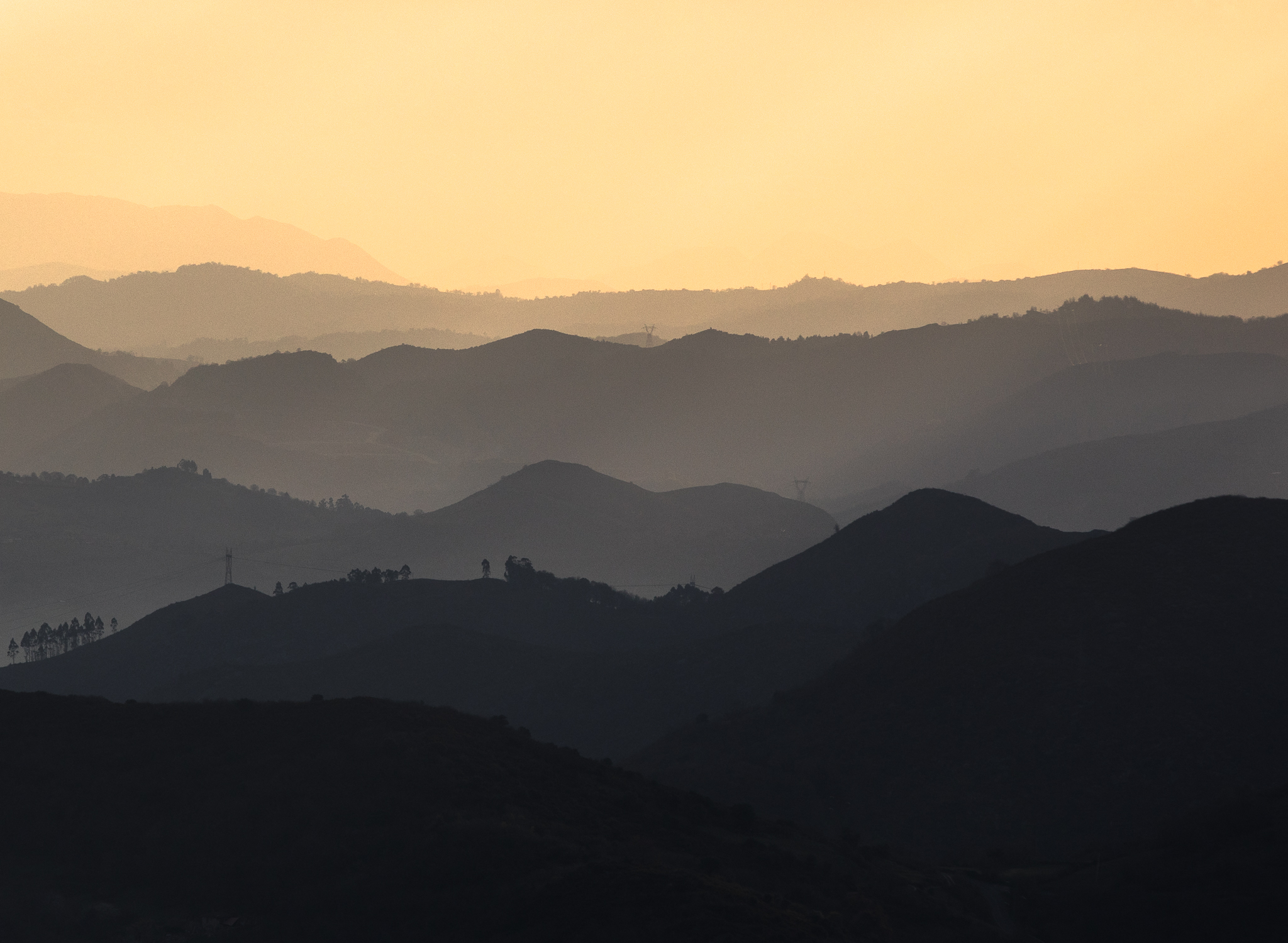 Daniel speaks English, Spanish and Italian, and he's been working as a translator for 12 years, the last six and a half of which he's been freelance. His first post-university job was in international marketing, and translation became a small part of that position. After realizing he had a knack for more than just sales, he took a post-graduate course in translation -- and he's built his business from there over the last decade. After coffee, I'm given a tour of their compact 120-year-old home, which has undergone some minor renovations, but still maintains much of its 19th century charm. After a tour of the village and an introduction to a few of the neighbors, we head back down the hill for some traditional Asturian lunch, but more importantly, a quick stop at the local market. Daniel's spoken English has a slight Irish accent, and as we wander around looking for the perfect cheese, we discuss how translation and technology are key to modern digital marketing. 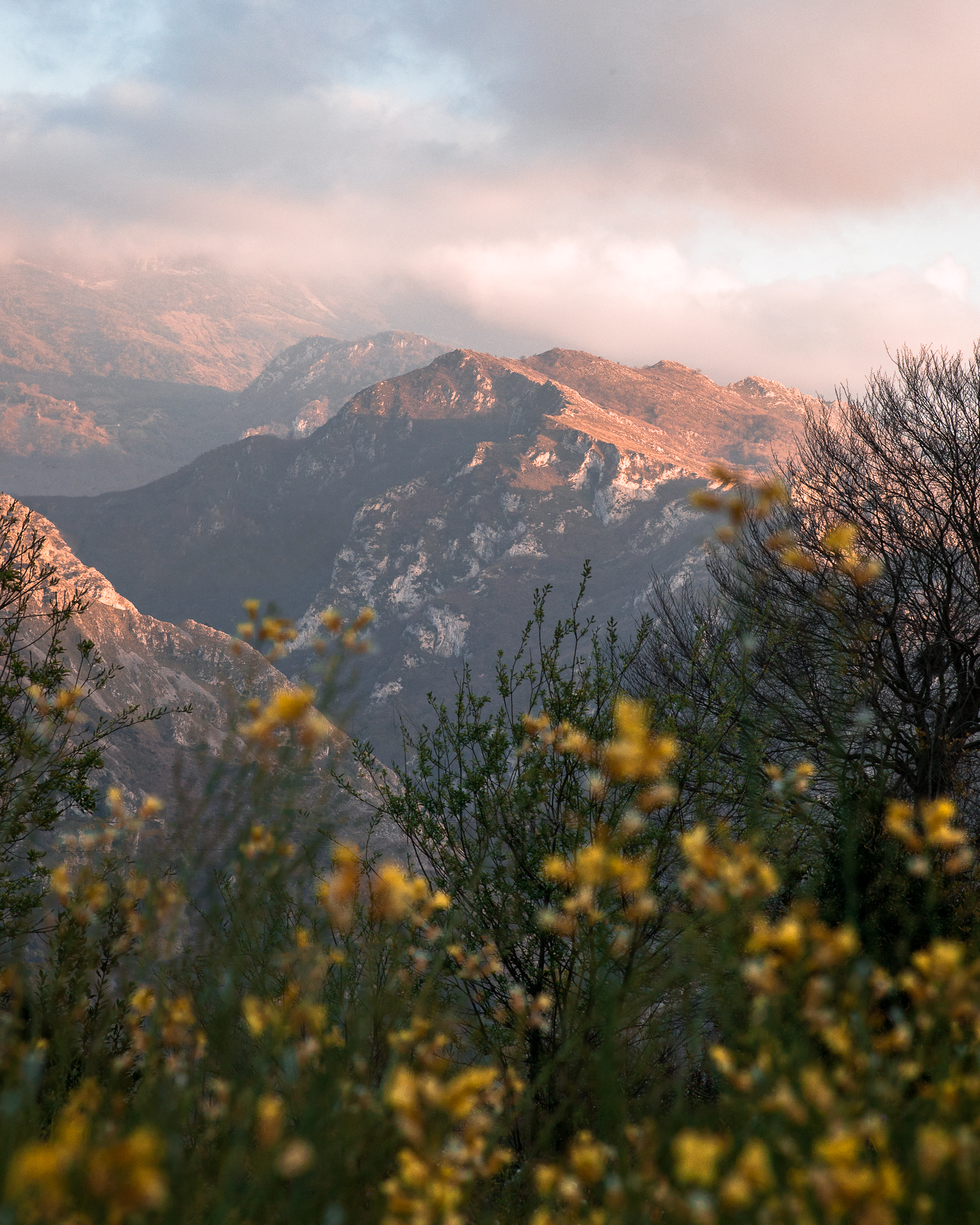 "Some people think translation is just about translating words, but it's so much more than that," he explains. "For example, it's very easy to see marketing fails that companies have had when they pour millions of dollars into an amazing campaign and then translate it through an automated system or hire a cheap, non-specialized service.'" Daniel stresses the importance of understanding a brand and product, and this is what enables him to make global businesses appeal to local markets. Not only does Smartling's translation platform have brand-specific style guides and glossaries, but it also has visual context and an option for translators to direct message clients. "I'll show you when we get back home," Daniel says, in between sampling a few different hard cheeses from a local vendor. We eventually settle on a large chunk of Manchego (probably the best I've ever had), and after procuring a few other items for wine and cheese night, we head back up the hill. 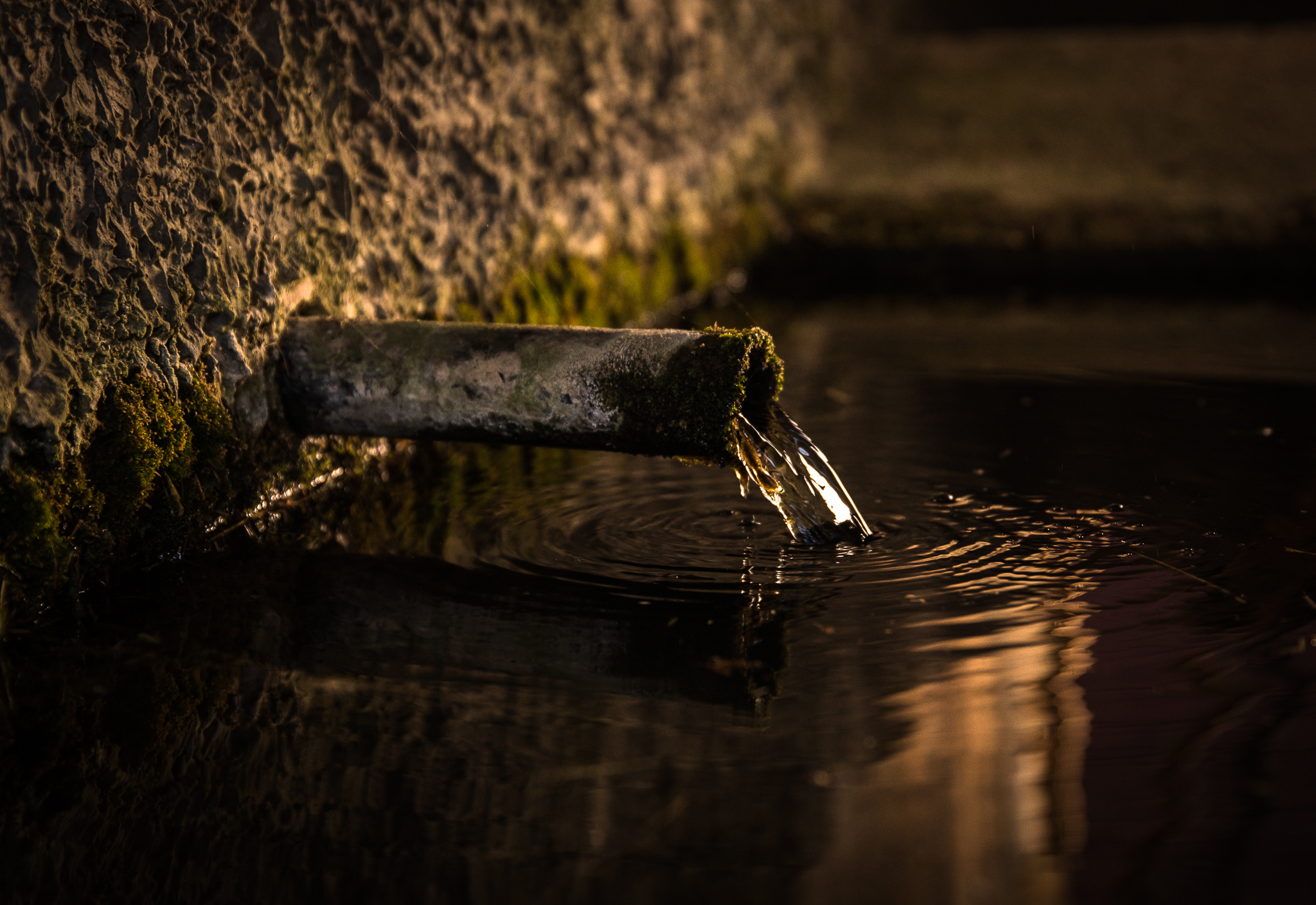 On the way home, Daniel fills up several glass bottles with water from a spring down the road. Thanks to this water source and the specialty shops in town, the couple produce far less waste than most urban dwellers. While their home is unlike any other residence I've ever visited, Daniel is quick to point out that the town is still fairly close by. "You can truly enjoy the best of both worlds," he says with a smile. We head upstairs to Daniel's office, which is more like a cave than a cubicle. "The visual context is super helpful," Daniel says, pointing at one client's web navigation menu, which is previewed in the Smartling window on his laptop screen. "Without context, words can have different meanings and therefore be translated differently. Normally I'd have to email the client asking for a preview of the layout, but with Smartling's platform I can see the placement before I even start translating. So, let's say a menu or a button has a character limit, I already know ahead of time." 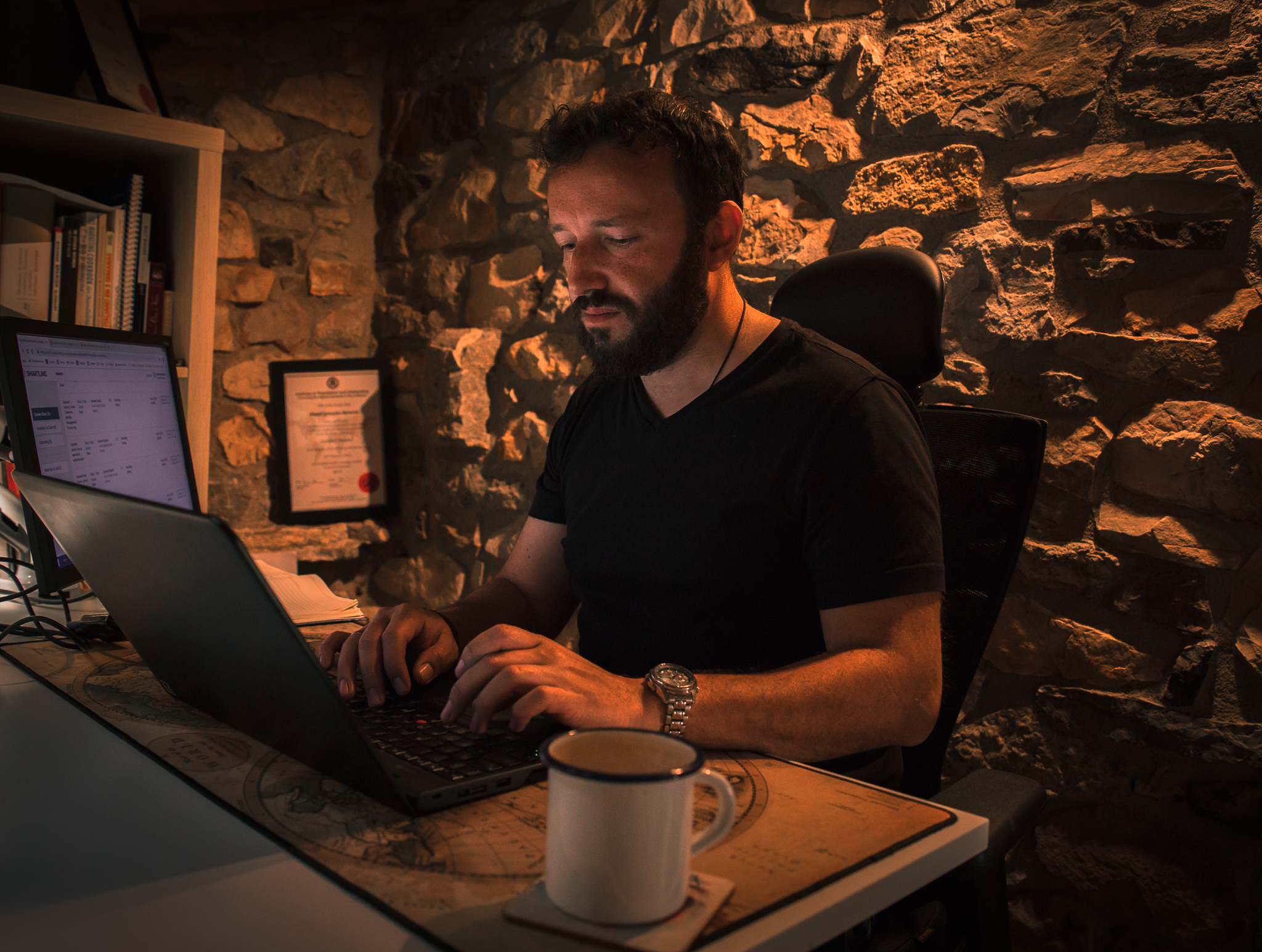 "Without this technology, I'd be spending a lot more time asking questions and looking things up than I would actually translating," Daniel adds. "After speaking with translators who have been doing this for forty plus years, the difference with modern translation is amazing. They used to have to receive documents by mail, translate them on a typewriter, then send them back via mail, so this is a massive change." And social media is causing brands to rethink their business decisions as well. From ad campaigns to communicating with customers, Instagram, Twitter and Facebook can be powerful tools. Daniel and his wife have Facebook accounts for friends and family, plus an Instagram account for Bowie. The Bowie account is just for fun and updated every few weeks, and while they spend far more time outside than they do on these apps, they definitely check them on a daily basis. 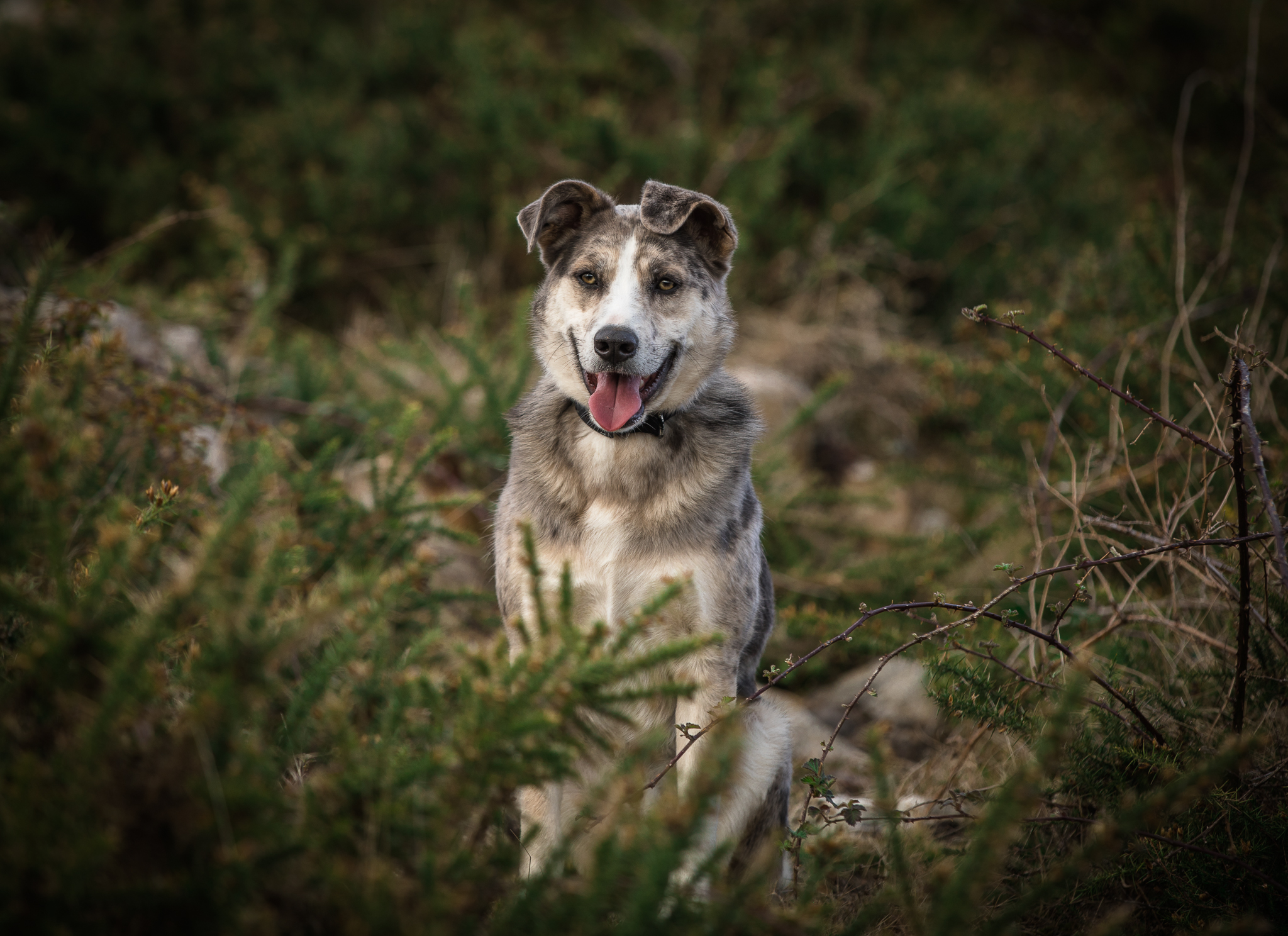 "Many years ago you wouldn't have imagined you might be able to interact so easily with big companies, and even their CEOs," Daniel says of accessibility in the 21st century. "These days you can send a tweet to Richard Branson and who knows? He might even reply." And because of that, companies are becoming more responsive and often creating a better consumer experience. Being able to connect these dots is clearly something Daniel loves, both as someone with a background in marketing and a gift for linguistics. And thanks to technology and a growing demand for translation, which is a 40 billion dollar global industry, Daniel has the freedom to do this from a rustic cottage overlooking the Aramo mountains. 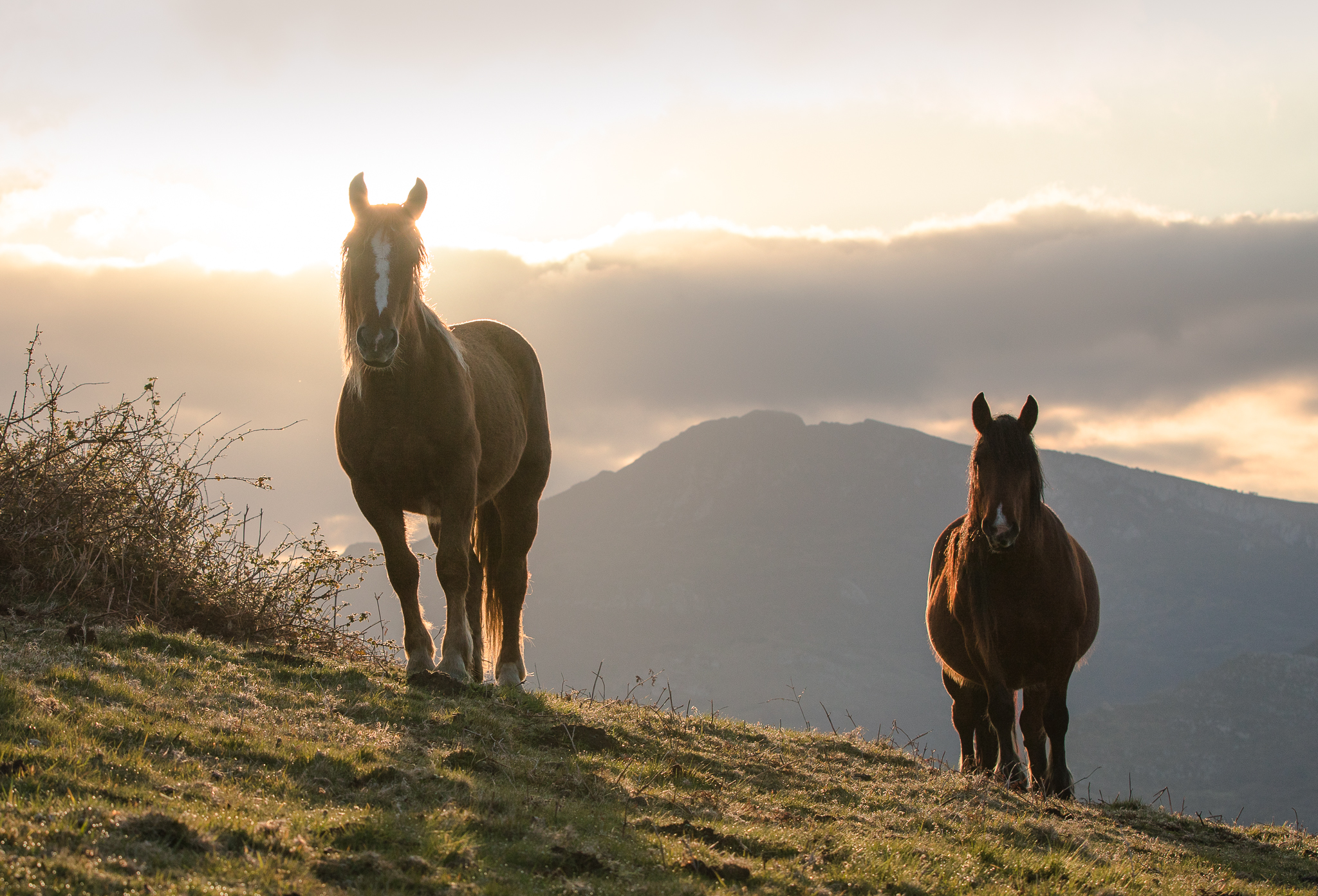 The three of us pile in the car and drive to the top of the hill, and from intense sunbeams to a pair of magically lit horses, I can't believe what I'm seeing. Normally we'd walk, but as soon as the sun drops, it starts getting unbearably cold and windy, so I'm grateful we took the easy way up. As soon as we arrive back at the cottage, Leah fires up the wood stove and we start preparing appetizers and drinks. Their neighbor, Jan, a sixty-something Dutch artist, joins us a few minutes later. Like Daniel and Leah, Jan has been all over the world, but these days he prefers to stick close to home. We crack open a bottle of red wine and have a toast, and over the next two hours, we discuss everything from the Instagram algorithm to nuclear fusion. While it's true that technology can encourage us to be less social and perhaps even more robotic, a lively dinner party with three fellow strangers in a cottage straight out Little Red Riding Hood feels perfectly normal these days. And I have digital media to thank for this introduction -- and a connection that will last for many years to come. 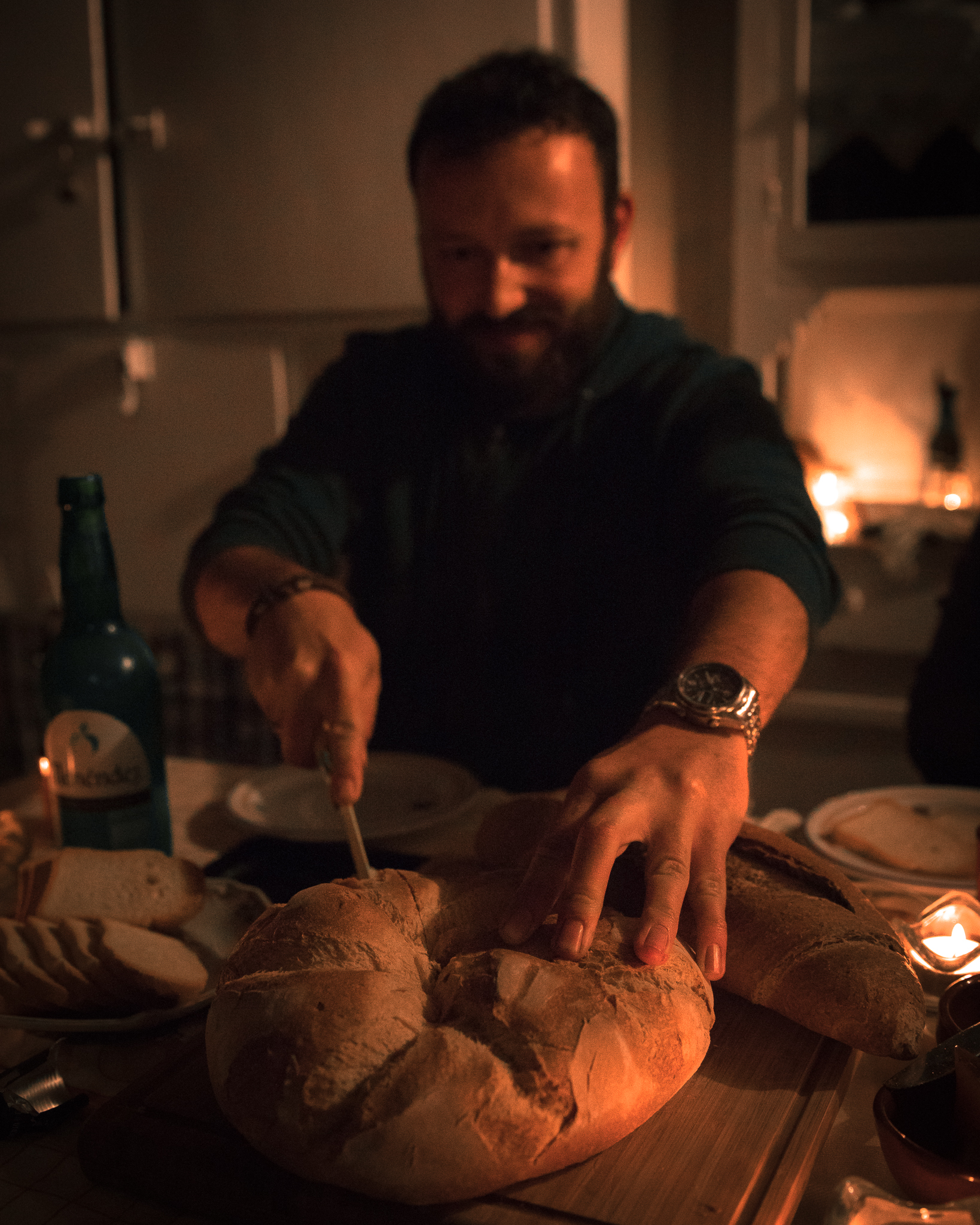 Move the World with Words™

Smartling is traveling across the globe to create a photo series about ten of our freelance translators. We want to give you a glimpse into their daily lives, and share their thoughts on language and communication in the digital age. We've teamed up with photographer/writer Elisabeth Brentano (@Elisabethontheroad) to capture these brilliant translators in their element and shine a spotlight on the diverse translator community so many of us rely on.