When he's not jamming onstage, he's cranking out translations. 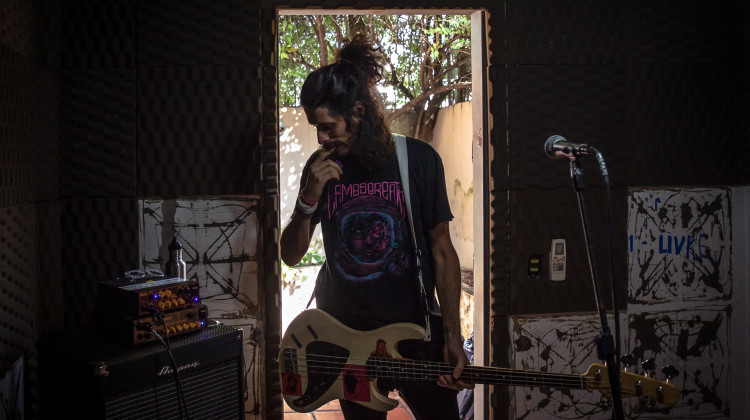 By Elisabeth Brentano for Smartling

As part of Smartling's Move the World with Words campaign, we're traveling across the globe to create a photo series about ten of our freelance translators. We want to give you a glimpse into their daily lives, and share their thoughts on language and communication in the digital age. We've teamed up with photographer/writer Elisabeth Brentano to capture these brilliant translators in their element, and our third profile is on Flavio, who splits his time between Sao Paulo, Brazil and New York City. 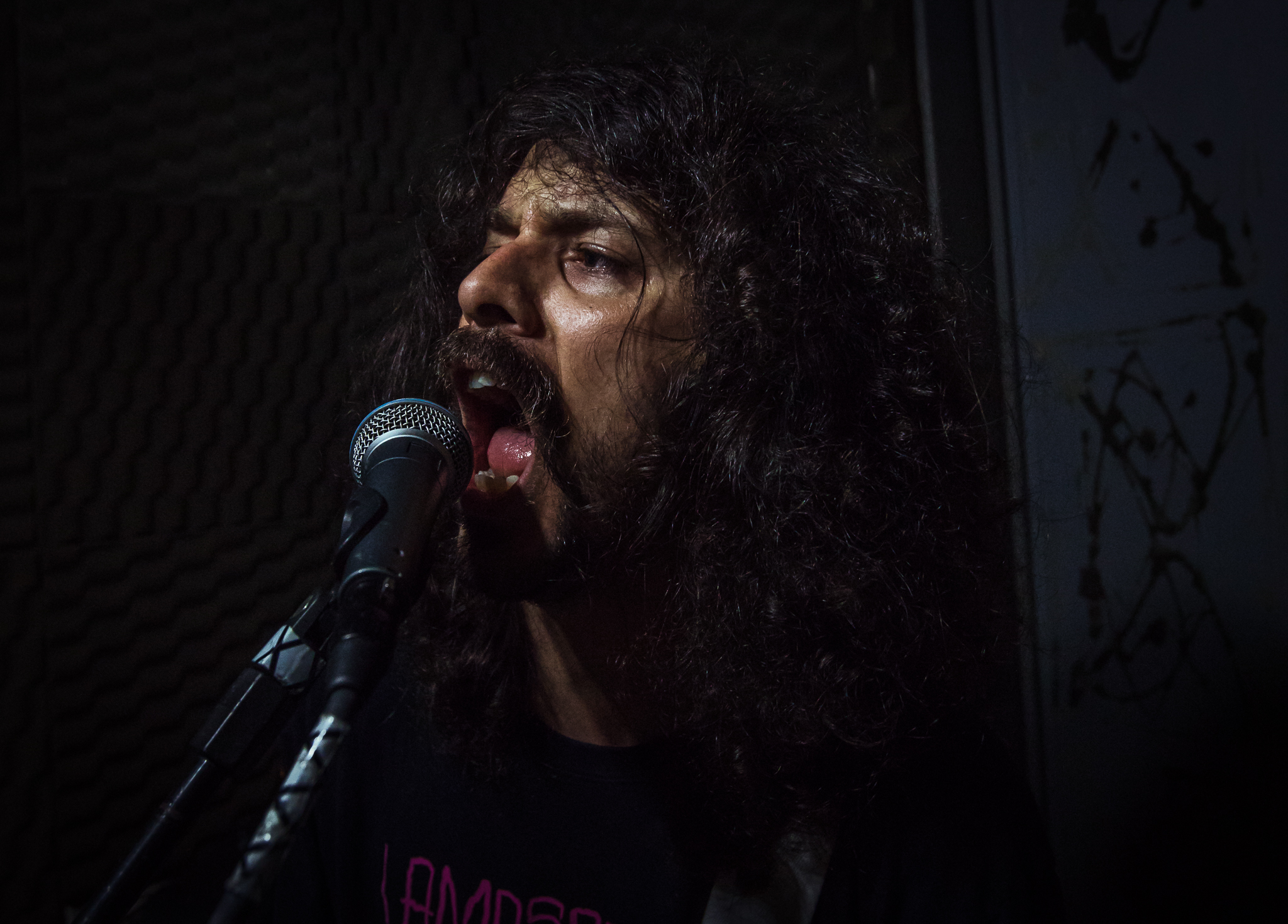 It’s not often that you meet someone like Flavio, but from his magnificent mane of hair to the way he seamlessly navigates his way between English and Portuguese, he left a pretty lasting impression on me.

One out of every thirty words he speaks has hints of an unidentifiable foreign accent, but then again, maybe it’s just in my head. For the most part, he sounds like another thirtysomething from New England who grew up on the Beastie Boys. Which he did.

But he also spoke Portuguese with his parents from a very early age, and he returned to Brazil when he was 16. He now splits his time between NYC and São Paulo, and he uses the term “binative” to describe his connection to both homelands.

"I can pick up on most all cultural references and colloquialisms between the U.S. and Brazil," Flavio explains. "That makes all the difference when I’m translating. While mistakes are certainly made, it hardly will ever be because I missed a cultural reference or a joke." 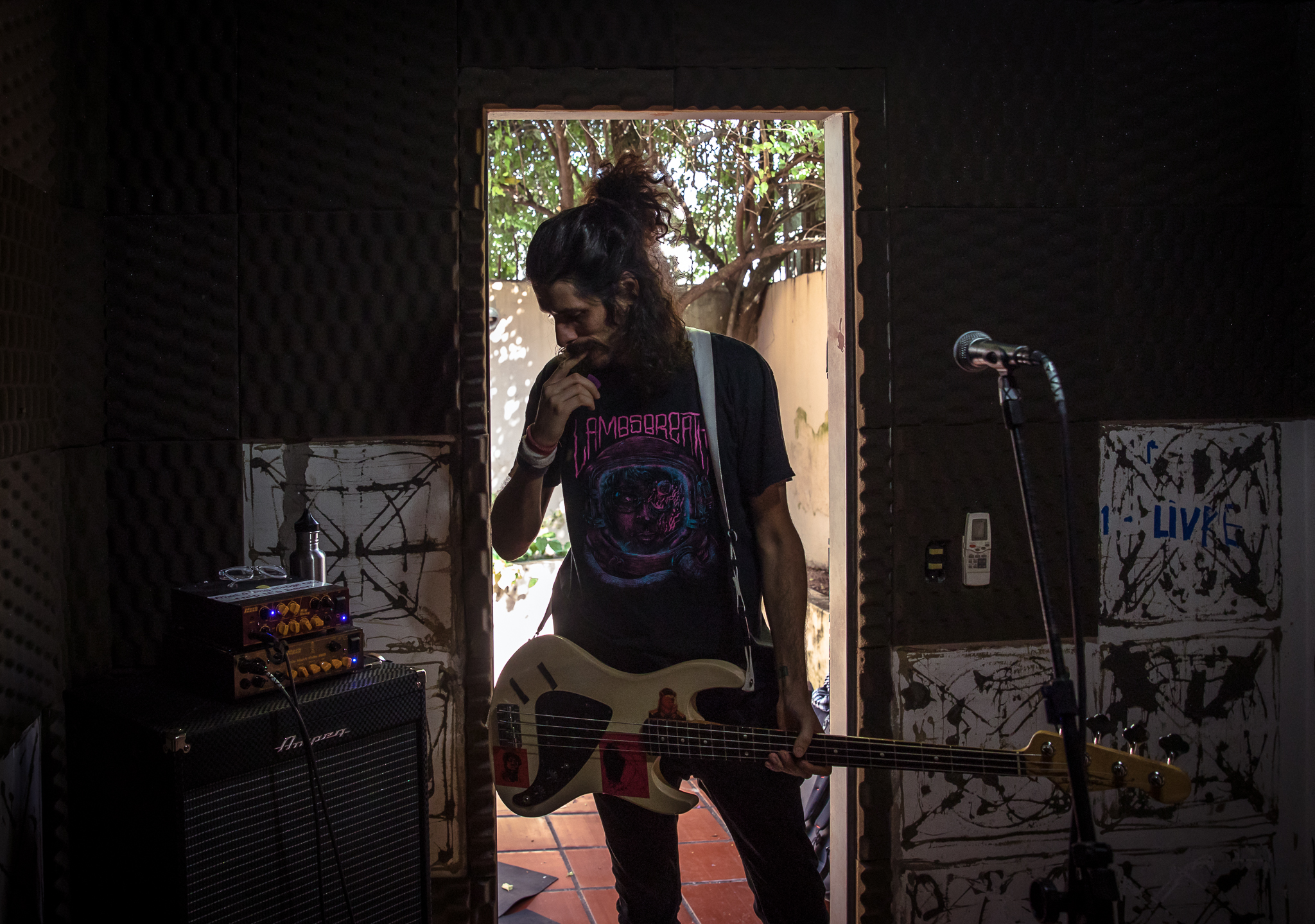 When we exchanged our first few emails about Move the World with Words, all I knew was that Flavio was a musician who spoke a few languages.

I was excited about that story angle, because there is a lot of data that shows individuals with a gift for music also tend to excel with language. I had no clue what he looked like — or what his sense of humor was like — until we connected on WhatsApp to sort out our schedule.

Within several minutes he was using American slang and sending silly memes, and I felt an instant connection to him. "You should hear the conversations my brothers and I have with each other," he says with a laugh. "It’s a total mix of English, Portuguese, and stand-up comedy and 80s and 90s movie quotes." 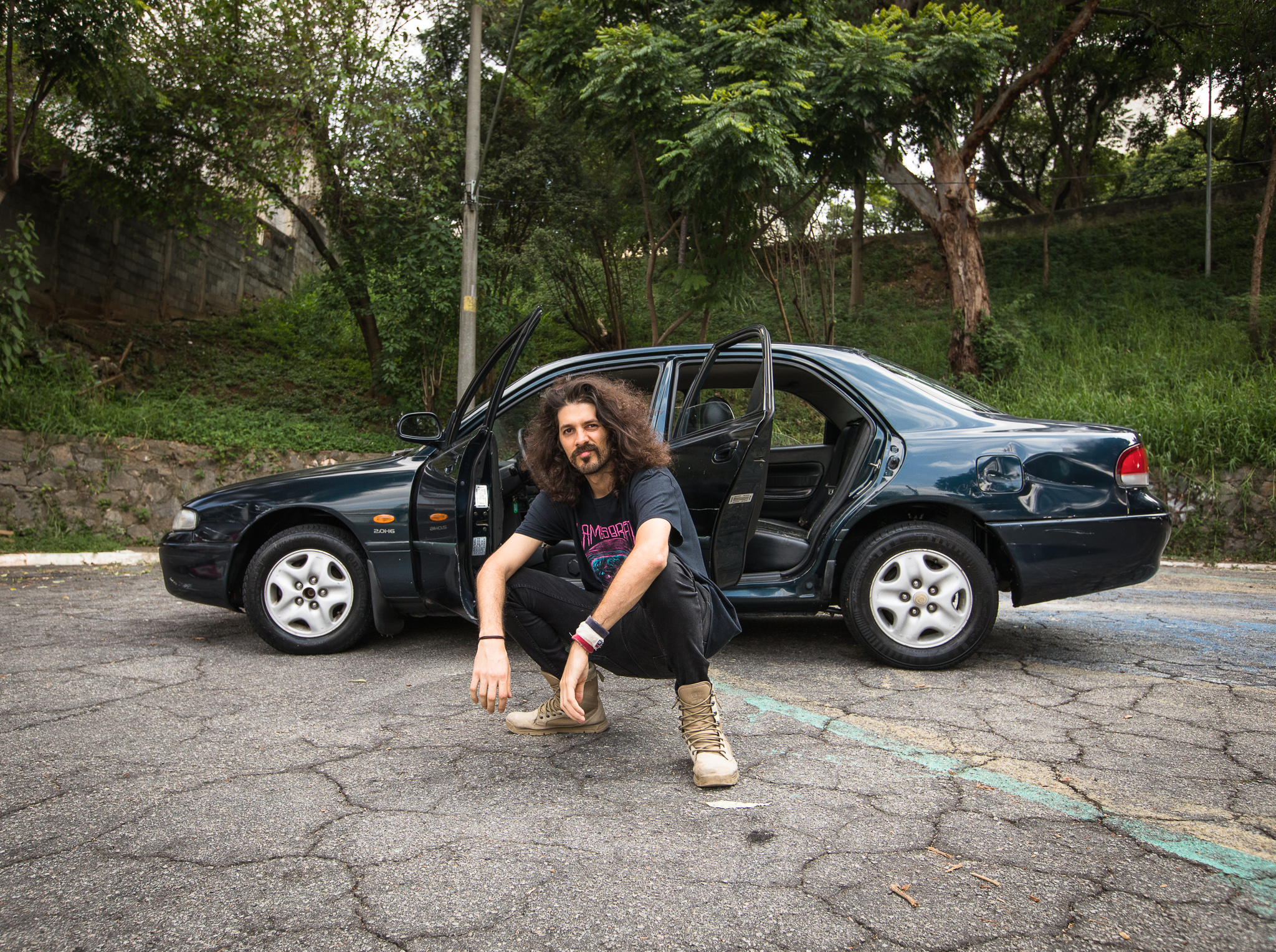 He may seem super serious in some of these photos, but I have just as many frames of him being a total goofball. He asked me to take a photo of him squatting next to his older model Mazda, because it was "so hip hop." (He later showed me the meme that inspired the photo above, which features a young Bill Clinton posing on railroad tracks.)

While I was able to capture genuine and intimate portraits of Flavio because we enjoyed one another's company, it also had a lot to do with the fact that he’s a performer. His band, Finger Fingerrr, isn't exactly mainstream (e.g., he doesn't regularly get recognized by fans on the street), but they have played at SXSW and Primavera Sound, both of which are major accomplishments for any musician.

"I’ve used my translation work to finance so much of this, and to buy great-quality equipment, and all the while helping innovative, fair and sustainable companies translate their work," Flavio explains of juggling his two jobs. "I can work from anywhere, and I know exactly how much I can and will work in a month. With a little bit of discipline, I can plan out my life and activities pretty well. My travels worked in around my band tours, and that’s mostly how I see new places, which is something I absolutely love." 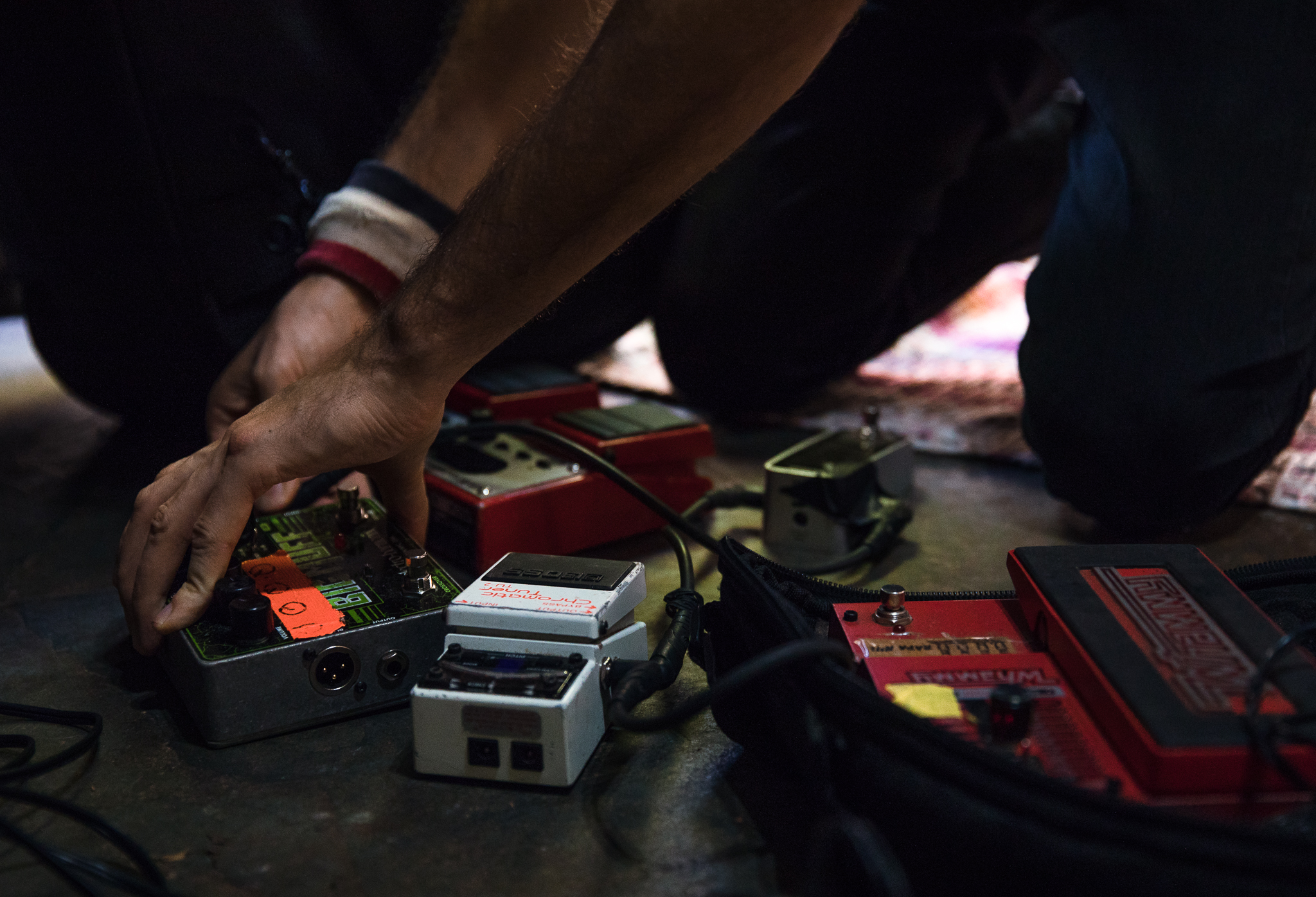 When I heard Finger Fingerrr's latest single, I think Flavio could tell it wasn’t my jam. He played me a few other songs, and several hours later I went to his rehearsal. "People go crazy at our live shows," he told me with a grin as he plugged in his bass. And, despite not loving his music upon first listen, I was blown away by what I heard in their practice space. After that, we headed back to his apartment, and he played a some beautiful tunes on his acoustic guitar, which he admittedly doesn’t touch as often as his electric or bass guitars. 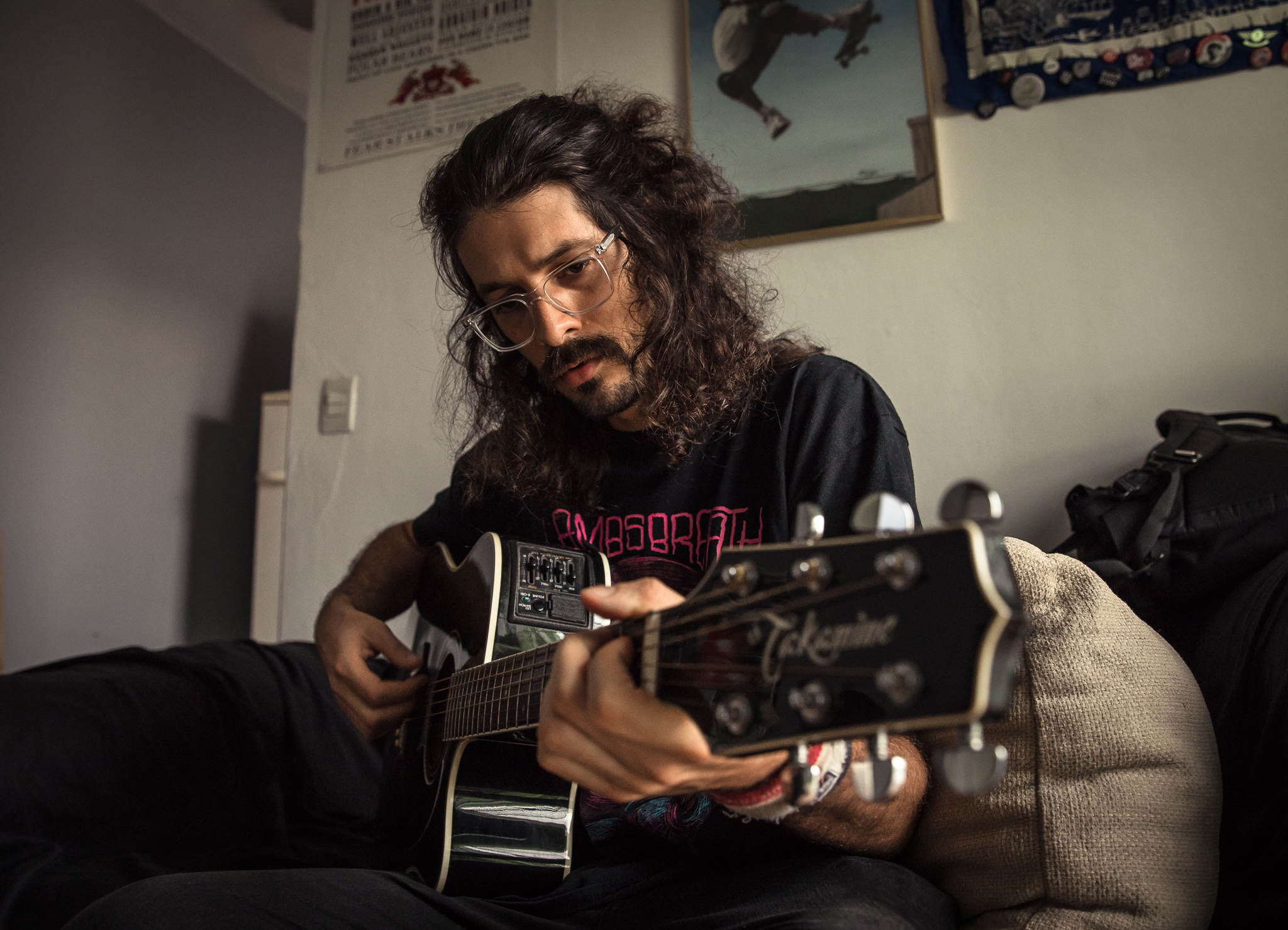 When asked about the similarities between music and language, Flavio lights up.

"In terms of actually making music, that's where I see the most obvious parallel," he says. "When I'm translating, I’ll work on a paragraph for a few minutes, but sometimes something is off. After a few attempts and tweaks I'll get it right, and when it reads back to me perfectly, it's a good feeling. The same goes for music, usually in the production stage of a song in the studio. I'm either singing or playing something and sometimes I know it's not all there, but once I nail it, I feel a deep sense of satisfaction."

As far as the ability to connect with a global audience, Flavio applies the same approach to songwriting that he does to translation. "Apart from that technical aspect, it’s pretty clear that music is a language of its own that everyone can understand," he says. "But when you can properly translate lyrics, it creates a full-sized blanket of feelings and sensations that cover the world." 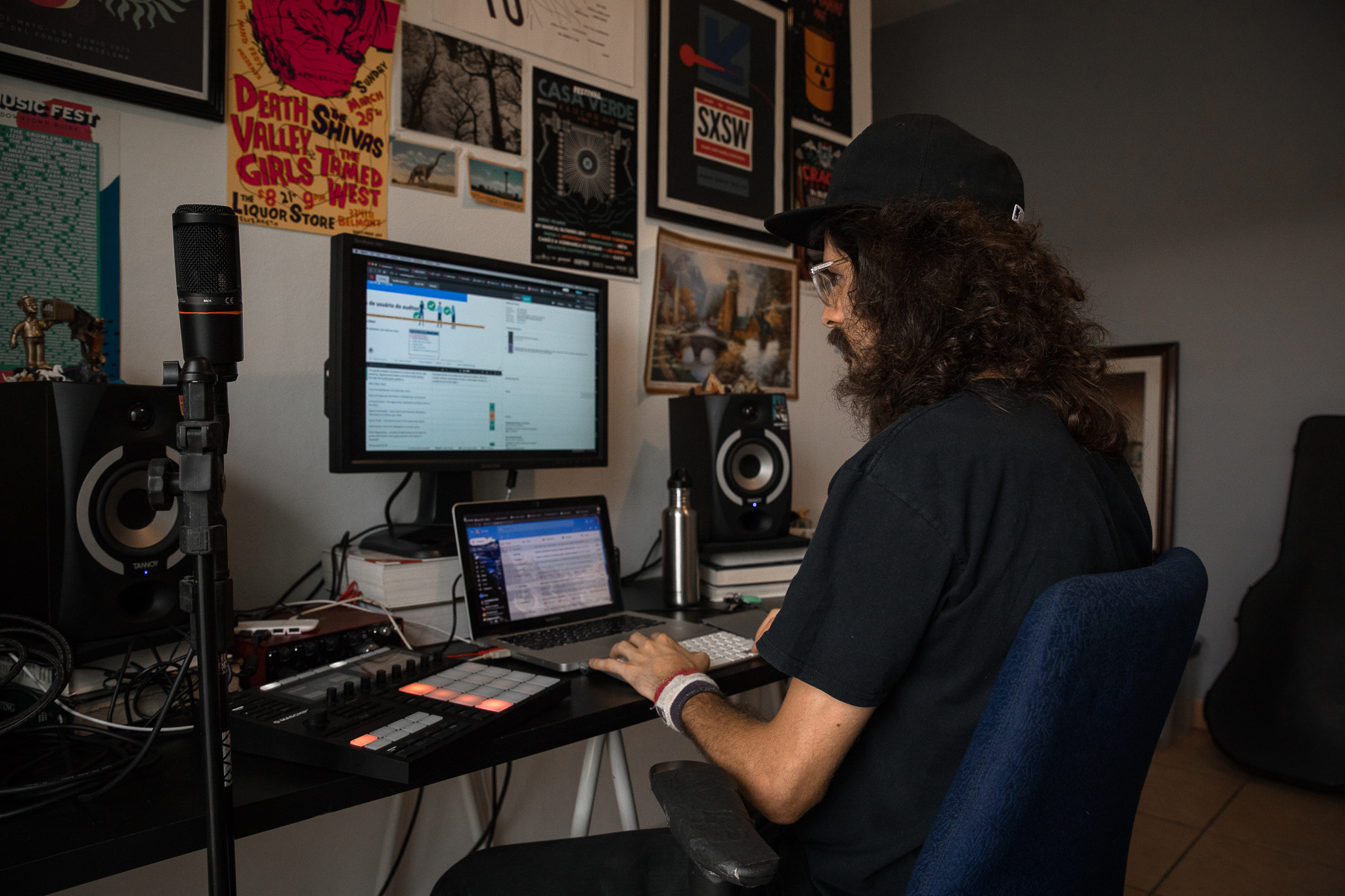 Flavio’s workspace is set up so he can work on both music and translation projects, rather than having a separate space for each. ”As translators, we usually have deadlines and a schedule, so it's easy to get stuck in a cycle where you're cranking out work and moving onto the next project," Flavio says.

He’ll often spend hours on a translation, and give his brain a “break” with a smaller and less intense project for his band, like reworking a riff or playing around with a new melody that could serve as an intro. This helps him hit the reset button and return to his translation work with fresh eyes — and ears. ”You really have to stop everything, clear your head for a second, and read the sentences back to yourself in a ‘local’ mindset, and decide if everything can be easily understood.” 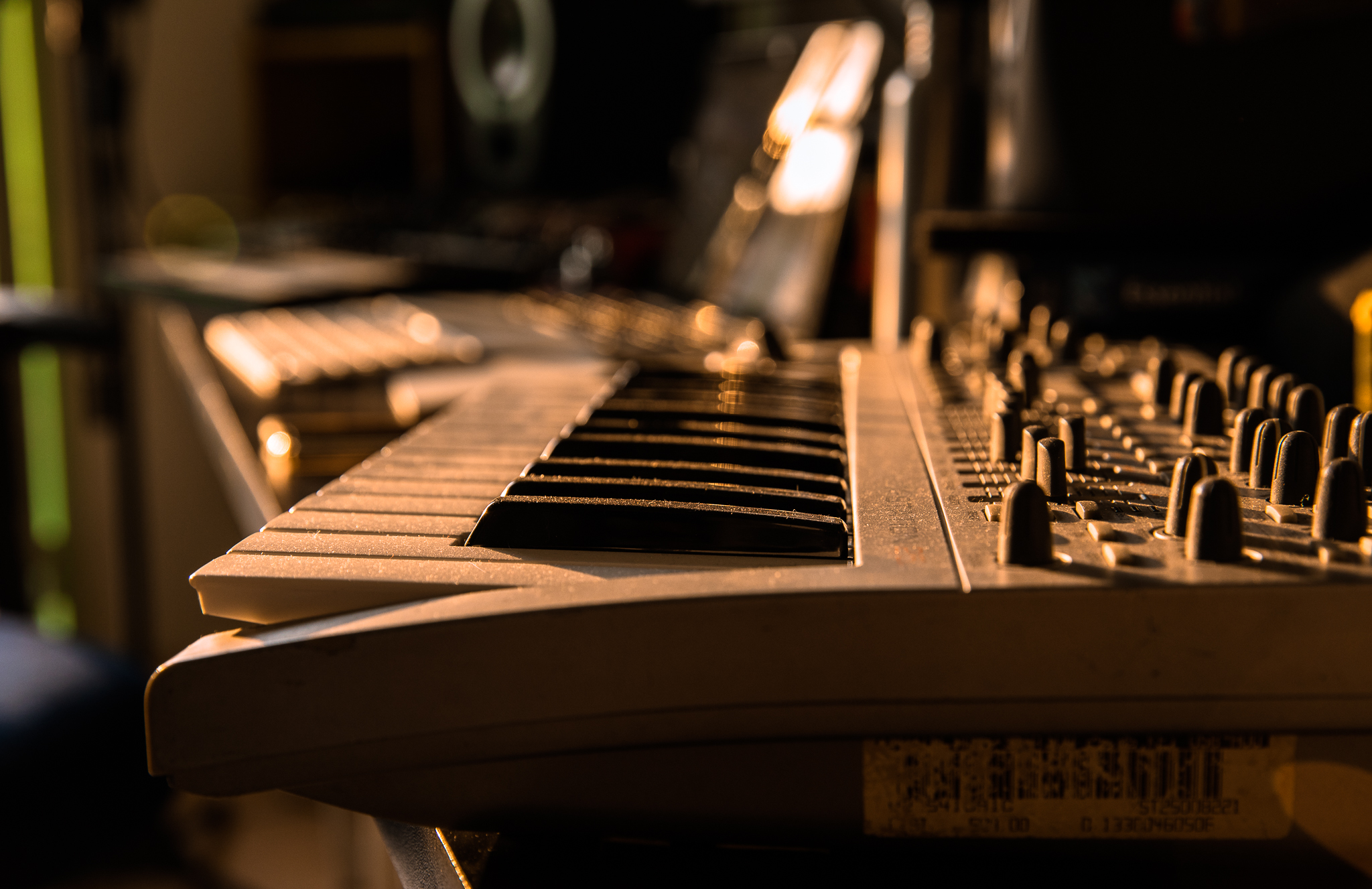 When it comes to automated translation, Flavio doesn't think it will replace humans, at least not for a number of years.

"I really don’t believe it will, because it’s made for humans," he explains. "Translations are only made because there are actual people reading words with their own eyes, on paper or on a screen. So I believe there will always be a need for a human touch and a linguistic and cultural understanding of both sides of the translation. Reading a purely machine translated piece made by AI just won’t sound right, and people will pick up on the one-sided staleness of it. And it's exactly the same with music. While technology enables us to push the boundaries with sound and art, it will never replace songwriting and storytelling.” 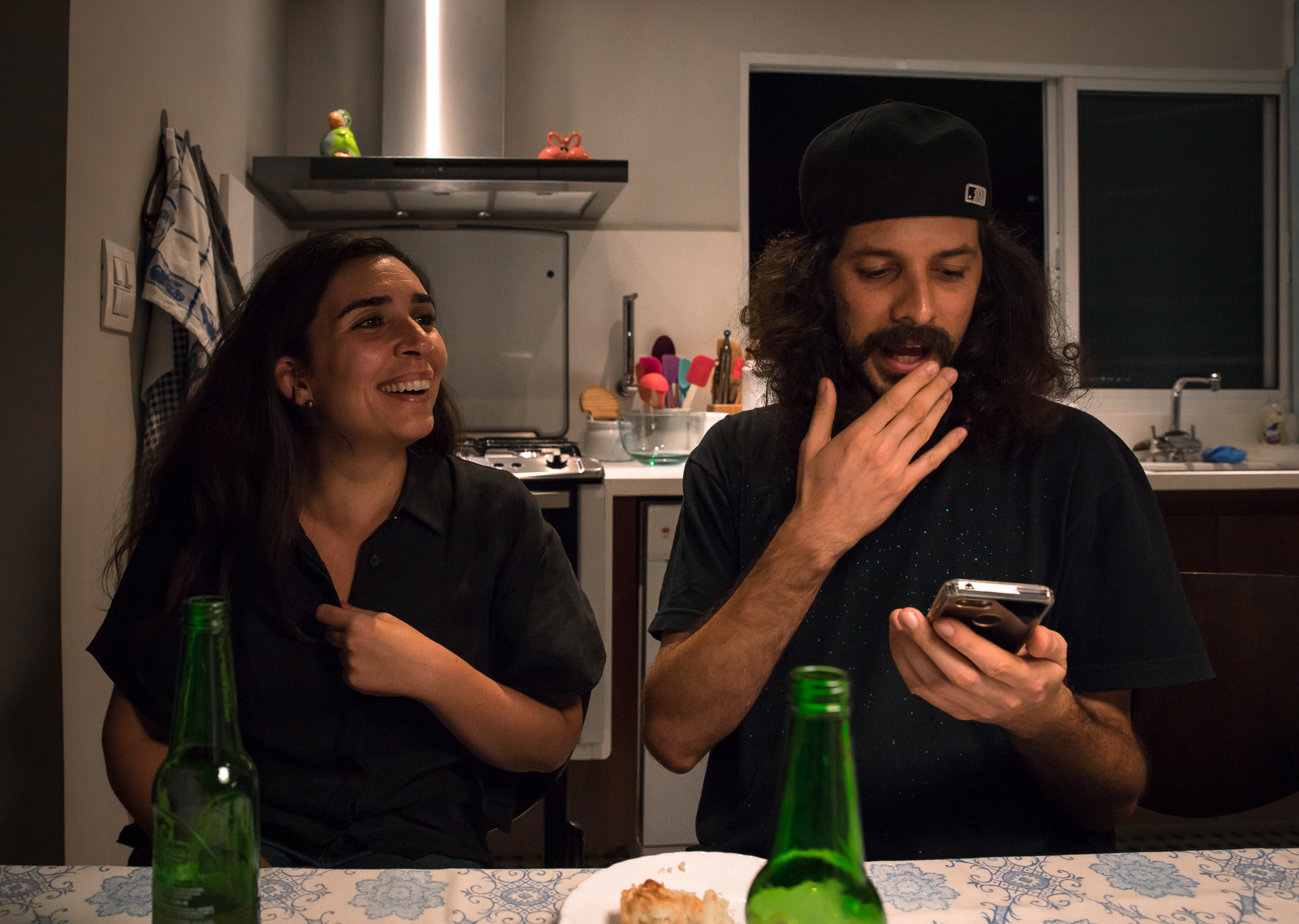 The next day we met up with Flavio's longtime friend Silvia, who regularly edits his work. The duo communicate constantly, and knowing each other’s strengths and weaknesses enables them to knock out projects more efficiently. And their partnership started several years before either of them started working for Smartling.

"I used to translate articles written by international professors on topics like sustainable entrepreneurship, and Silvia reviewed my work," he says. "My Portuguese grammar skills weren't nearly as sharp at the time, and Silvia would save the day with her amazing proficiency. She loves language and is a stickler for detail, so she is the type that will stop you in the middle of a sentence if you make a careless conjugation mistake."

Still, Silvia maintains that Flavio's work is well organized and easy to review, and while she may roll her eyes at his wisecracks, it's also something that keeps their partnership lively and inspiring. 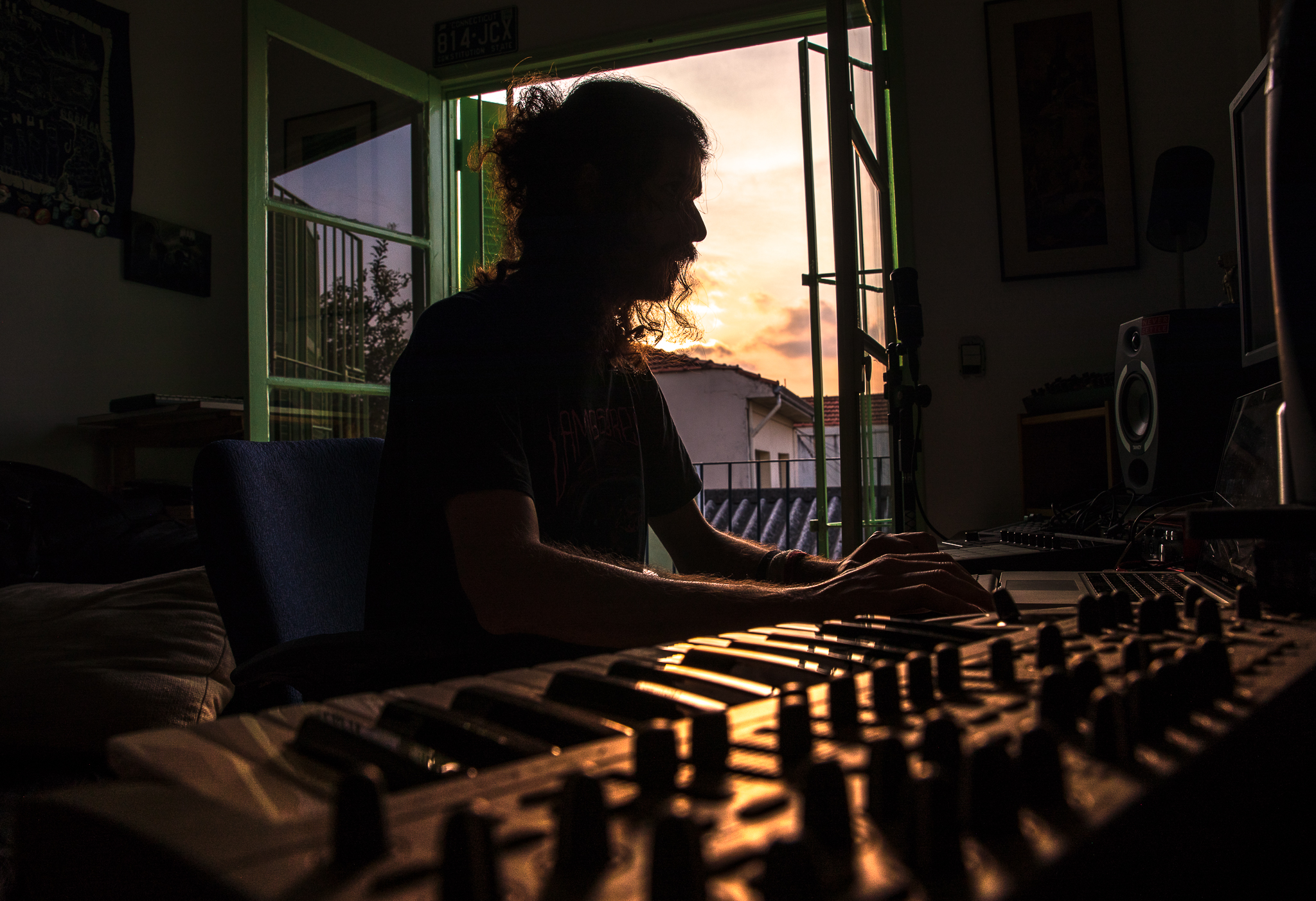 "Good translations take years of work, practice and experience,” Flavio says of mastering his craft. “When done right, translations should be undetectable; a perfect little secret, if you will. When you work behind the scenes to create a sentence that people in different parts of the world read exactly the same, that is underlying magic of language.”

Move the World with Words™

Smartling is traveling across the globe to create a photo series about ten of our freelance translators. We want to give you a glimpse into their daily lives, and share their thoughts on language and communication in the digital age. We've teamed up with photographer/writer Elisabeth Brentano (@Elisabethontheroad) to capture these brilliant translators in their element and shine a spotlight on the diverse translator community so many of us rely on.