How to Localize Your Mobile App 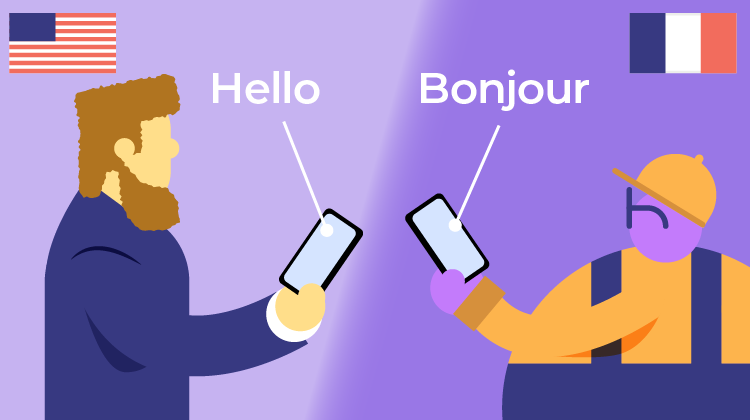 Check out how Butterfly Network fully translated UI for iOS and Android.

When I was younger, I would dream of the day I could carry my own personal computer around with me in my pocket.

I finally got to realize my dream just before college, when I entered the smartphone era with my iPhone 4. For the first time ever, I had the internet and all my entertainment accessible right in my pocket.

Fast forward to 2020 and the world has quickly become mobile-first. This domination in smartphone users has driven the current app economy. This is because apps are the core of the content we consume on our smartphones - from shopping, to banking, to gaming, and even just reading the news or watching a live stream.

But just because your app is available for download doesn't mean it's ready for use around the world. That's where localization comes in.

Why localize your mobile app?

If your product is cloud-based software, then your product is a global offering from day zero of your product inception. Of course, the same is true for mobile apps. As soon as you release that app into the store for users to download, it can be accessed and used around the world.

But, if your app is only available in one language, you're missing out on creating a high-quality user experience for your global audience"

The proof is in the numbers. ASOS, an entirely eCommerce focused retailer, managed to grow their business 149% over the last 5 years by offering over 200 different localized online experiences, with 12 localized websites.

By localizing your application, meaning adapting the UI and UX to a new language and region, you'll increase your monthly active users, user engagement, app downloads, and ultimately your revenue.

Who you will localize your app for?

Determining the who, or where, in this equation is an important factor. It may not make sense to localize your app for a region with only 10 active users, when other regions are pulling in thousands.

But then again, those 10 active users could be your most loyal following and biggest spenders.

Your brand can determine what languages or regions to localize for based on a number of telling factors:

Armed with the right knowledge, you can make the right investment in localization. Many businesses will see localization and translation as an all or nothing proposition, but you should let the data tell the story.

If you don't have any users or there is no need or interest for your app in a certain region, maybe hold off on localizing for that language for the time being. Instead, focus your efforts where you will see the most return.

How to localize your mobile app

The sooner you localize, the better. In fact, localization should be a consideration from day zero of development.

Since your apps are available around the world as soon as they're released into the marketplace, it makes the most sense to offer localized versions to your largest target demographics right away.

Here are some best practices for mobile app localization:

Support localization from the beginning

When building your app, best practice is to separate UI elements -- text, images and other media -- from your executable code.

Separate content into blocks or elements that can be uploaded or pulled via an API into a TMS, where content is broken down into strings for the translation process and easy integration back into the app.

All of your content should be translated and localized for the specific region and language you'll be targeting.

This of course means translating all text in the app, but also extends to swapping media like images and videos for localized versions.

A great example of this on a larger scale would be video game localization, where developers will alter their game for release in different countries.

Just like with localized web content and multilingual SEO, you want to make sure that your localized app can be found by new users.

You'll need to localize the App Store metadata of your app, like any keywords that users might search, as well as the description, name and images of your app. You may even want to consider translating user reviews for a more authentic experience.

Without the right resources, translation is a huge headache, especially with mobile apps that are constantly being updated, sometimes multiple times a day.

An agile TMS enables you to automate, manage and professionally translate your app with one centralized source of truth. By integrating with your code repository, new updates can be automatically ingested into your TMS, translated, and pushed back to your repository as soon as they're ready. Translation shouldn't slow down your entire development process.

Leveraging a cloud-based TMS will be the easiest way for your brand to stay on top of all your app translations and updates. While it was once necessary to leverage a delivery network for over-the-air app updates, including new translations, modern app release cycles have simplified the process of pushing updates rapidly.

You’ll need localization to be successful on mobile in 2022

Your app will be a global product from day one. As soon as it's released, it’ll be accessible for users around the world, no matter what language they speak. The facts are pretty clear: mobile has become the dominating platform for connecting with the world.

Especially when you look at the staggering statistics: $61.7 billion was spent on mobile games alone in 2019. There’s a massive market for mobile users around the world, and language accessibility is what will drive engagement at scale.

In 2022, it's critical to ensure that anyone can use your app, no matter where they’re from or what language they speak.

Check out how Butterfly Network fully translated UI for iOS and Android.