5 Challenges to Consider When Translating from English to German

You’d think translating languages in the same family, like English to German, would be a piece of cake. It’s not quite that easy — we connected with one of our best English-to-German translators about what you need to know. 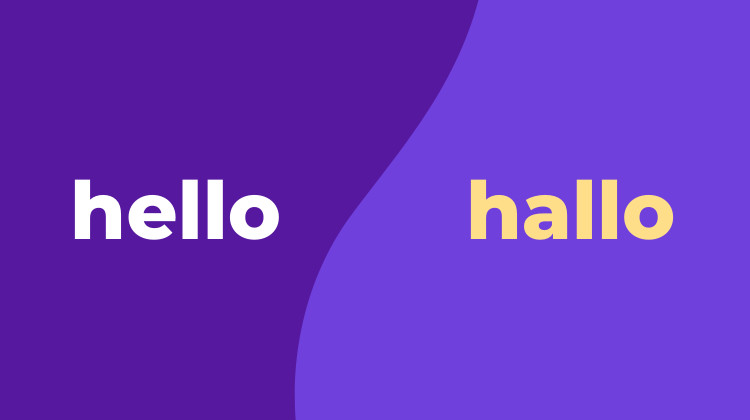 Over 130 million people speak German, and not just in Germany. The language is spoken in over 42 countries.

You may already know words like delicatessen, kindergarten, schadenfreude, or Über. Start looking closely, and you’ll see similarities between German and English, especially with vocabulary, alphabet, and culture. According to one of our expert translators:

“English and German, in comparison, have a fairly similar and compatible syntax and grammar, as well as more of a ‘shared reality,’ I would say, in terms of how the economy, society, and culture work.” - Michail S.

Five common challenges for German translations (and how to solve them)

While you’ll find plenty of similarities in vocabulary and sentence structure between the two, there are still grammar, style, and cultural differences to be aware of if you’re translating between English and German. That’s why we turned to one of our expert German translators for advice.

These letters are not often counted as part of the official alphabet, but they impact the way you speak German. For example, an umlaut (Ä, Ö, Ü) signals to the reader or speaker to use a sharper sound, often in the plural form.

The essette (ẞ) signals to the reader or speaker to use a sharp s-sound, like a double s.

Common words that use these characters include:

These symbols are relatively common and designated only for certain words, so they don’t often impact translation.

However, you do need to make sure your website and application can accommodate them by going through the internationalization process. This typically takes place before any translation or localization and prepares the back-end code of your website to handle other languages, including different characters and accents like these.

German is notorious as one of the longest languages, expanding English text dramatically when translated. This is not necessarily because German is more expressive, as is the case with a language like French. In fact, Germans are just as concise and direct as English speakers, if not more so.

The average German word has more than six letters, while the average English word only has 5.

Ask any designer that works with global translations, and they’ll tell you that German is one of the languages that causes the most headaches. About 35% expansion means several lines of additional copy. This can wreak havoc on careful, mobile-friendly email or website designs and make it impossible to work within the restraints of document translation work for fixed-character projects like PDFs and presentations.

As for the longest word in a German dictionary of over 5 million words? That goes to the translation for Attention-Deficit Hyperactivity Disorder (ADHD): Aufmerksamkeitsdefizit-Hyperaktivitätsstörung, coming in at a whopping 44 letters.

In German, you have to learn agreements and tenses for three different genders: masculine, feminine, and neuter. This adds a layer of complexity for English speakers, as English does not add gender to nouns.

German also has multiple levels of formality, like many foreign languages:

There are three different ways to say “you” in German, varying by formality. What makes it more confusing for English speakers is that the word “sie” is a pronoun also used for singular “she” and plural “they” forms.

What can trip up English speakers the most, though, is a word most people overlook: “the.” There are 16 different ways to say the word “the” in German (der, die, das) based on a combination of gender, plurality, and case:

The German language is known to be one of the most complex languages. German-English translation has to consider this grammatical complexity and requires robust quality assurance for high-quality translations. Smartling automatically incorporates consistency, spacing, and other quality checks directly into the translation process.

It’s essential to provide context to your translators with any language, especially a language known for precision. Your team needs to know what type of page or content they’re looking at, the goals for the page, and notes on images, layout, and design, so they can provide more accurate translations. This is because you will lose huge credibility points with your audience if you mention something inaccurate or overenthusiastic with German.

“German can be pretty dry and technical. It’s a highly accurate language, which makes it great for technical stuff, but perhaps a bit aloof and less suitable for expressing yourself. Americans use the word ‘love’ for hazelnut ice cream, rollerblading, or really just about anything. When Germans say they love something or someone, there’s a lot of time and thought behind that. It’s a culture that values the ‘deep’ kind of sincerity and frowns upon superficiality.” - Michail S.

As Michail describes above, even if the actual words are the same, the meaning can be completely different. That’s why transcreation is a crucial aspect of translation. While translation might directly translate word-for-word what’s on the page, transcreation takes nuances like this one into account to localize the word or phrase into something that has the same idea but resonates more deeply with your target audience.

When you submit your request for translations in tools like Smartling, make sure you include notes on how words and phrases will be used through images of the UI, a content brief, or strategic information on brand and tone of voice. That arms your translators with more information and specificity they can use to translate and transcreate as needed. You can do this directly through Smartling’s translation tool that automatically creates a glossary and translation memory for reference.

Culturally, English speakers are known to be enthusiastic and expressive. On the other hand, languages like German are more polite and reserved, and repeating words and phrases can come across as too bold, pushy, or self-serving.

“One thing about translating customer-facing content from English into German is that English copy often tends to be much bolder and more boisterous. Something like ‘I absolutely love CoffeeMaster2000, it’s just a wonderful addition to my kitchen. The flat whites are really something out of this world. It makes my day every single morning,’ is something an American customer might realistically say. But it would need to be toned down for a German-speaking audience because it would be perceived as overly enthusiastic when speaking of a coffee machine.” - Michail S.

Even if it makes sense to write copy like this in a marketing context for English-speaking audiences, this is an excellent example of localization at work. Localization isn’t just about changing the words of a given piece of content; it’s also about making it feel like it was written by a local. As Michail says, Germans wouldn’t talk like this about an appliance—even if it is the best coffee maker in the world.

Any marketing copy has certain goals, whether they be converting email subscribers into paying customers or driving awareness of new features and products. Translators have to strike a balance between those goals and what resonates culturally with a German audience.

Focus on creating localized experiences for your customer, and we’ll take care of the rest. There is no need for Google Translate or machine translatio. Whetherr you’re translating into Spanish, Portuguese, French, Italian, Russian, Polish, Dutch, Japanese, Danish, Chinese, Finnish, Arabic, or another of our many languages offered, we have you covered.