4 English-to-Arabic Translation Challenges and How to Solve Them

One of the oldest languages in the world, Arabic is an official language of more than 25 countries. Here’s what you need to know about translating English to Arabic. 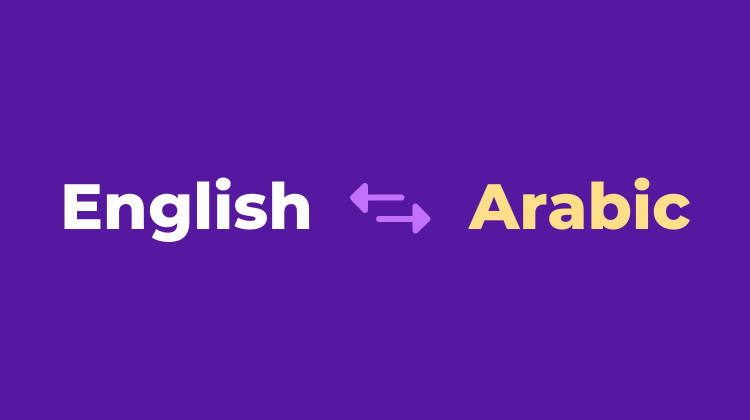 Across the Middle East and Africa, you’ll hear more than 30 varieties of Arabic.

One of the oldest languages in the world, Arabic is an official language of more than 25 countries, from Qatar to Saudi Arabia to Algeria, and it’s one of six lingua franca languages for the United Nations. While it’s not a Latin-based language like French or Spanish, you’ll find Arabic’s influence across many other languages in the region, like in Turkish, Persian, Kazakh, Kurdish, Urdu, and Malay.

Between grammar differences, cultural preferences, and style and tone for modern translations, there’s plenty to learn about translating content between English and Arabic.

Arabic vs. English: 4 common challenges and cultural differences to keep in mind

One of the most significant challenges with translation is preserving both the meaning and the style and tone. So we talked to one of our expert Arabic translators to better understand how they navigate the balance between cultural differences, tone, and grammatical changes between the two languages.

“The everlasting challenge is to interpret both the original meaning and style. Let’s take literature as an example. Arabic writer and translator Fatma Naaot expressed the dilemma in her introduction to a book of Virginia Woolf’s stories that she translated. She said, ‘I asked myself a question: Is my job as a translator to communicate what Woolf says or how she says it?’ Naaot said she chose the second option…[which is] the harder choice.” - Ebtesam M.

Here’s what you need to know:

1. Arabic letters with no equivalents for English translation

Arabic is the fifth most popular spoken language today, with 313 million speakers. But popularity doesn’t mean simplicity — for example, since Arabic uses right-to-left formatting and English uses left-to-right, translating online content can be challenging. Only a few other languages require such a change in formatting, like Hebrew (which is also left-to-right) or languages that can be written vertically, like Korean, Chinese, or Vietnamese.

Translation gets even more complicated when you look at the Arabic alphabet, which has 28 letters (as opposed to English, which has 26).

“There are some Arabic letters that have no equivalent in English. Many foreign Arabic learners remain unable to pronounce these letters because some of them have special tones that are not found in any other language. Examples include (غ), which is substituted by (gh), and (خ), which is replaced by (kh).” - Ebtesam M.

This makes transcription difficult when writing Arabic names in English letters. Take, for example, the name of an Arabic writer mentioned at the beginning of this article: Fatma Naaot. The section “aa” is the standard attempt to make the double (a) sound like the Arabic letter (ع). However, the letter (ع) is emitted from a deeper place in the mouth than the English equivalent (aa). English alternatives are out there, but most of them have different articulation points than the original Arabic letters. Translators have to pick the letters that best resemble the sounds of the Arabic ones.

Before starting any Arabic translation project, you’ll need to make sure your website can handle these formatting changes in a process called internationalization, which adapts the architecture of your site to separate your user interface (UI) from the source content. This is different from the localization process, which focuses on transforming your content from one language to another while also considering cultural nuances.

2. Differences within Arabic culture itself

Naturally, with more than 25 countries home to Arabic speakers, you’ll find variations between pronunciation — so much so that it can be difficult for one Arabic speaker to understand another, just like in English. (If you've ever tried to talk to someone from Scotland — or Boston for that matter — as an American, you know what I mean.)

“If you hear how Arabic is pronounced in different Arab countries, you may think that they are speaking different languages. Dialects may even vary within the same country. In Egypt, Cairo residents say “fetert” (“I ate my breakfast”) while people in the province of Alexandria pronounce this “fatart.” Regardless of the pronunciation, this word is slang. Arabic translators should be aware of all of these differences when carrying out their projects.” - Ebtesam M.

3. Having to shift the way of thinking

One of the most popular (and controversial) linguistic theories, the Sapir-Whorf hypothesis, states that different cultures think differently because of how their languages are put together.

While much of linguistic determinism has been debunked in recent years, there’s some truth to how languages shape a person’s pattern of thinking. Translators have to shift into an English-thinking mindset to make sure the meaning makes sense. That can be challenging because English grammar looks very different from Arabic, especially regarding verbs:

“In English, the sentence, “I think of/about something/someone,” would translate most closely into Arabic as, “I think in something” or, “I think by someone.” Similar confusion reigns when translating the sentence, “I am thinking of my new wardrobe, I really like it.” Arabic use of prepositions would make this “I am thinking in my new wardrobe, I really like it.” Translation errors are not always that funny.” - Ebtesam M.

Arabic has no “to be” verb, which serves as the foundation of almost every English sentence. It also doesn’t have the corresponding verb “do” and doesn’t distinguish between the past and present in tenses, which requires an entirely different way of processing time and space.

4. Arabic has many ways to convey the same meaning

English tends to be a very direct language. We say what we want to say quickly and concisely, especially in a business setting.

That’s not necessarily true for other languages, like Arabic:

“It is said that Arabic is an emotional language. While it may be a ‘fertile’ language, a 2,000 word Arabic document can be translated into just 1,500 English words. This happens because the Arabic language has many ways to convey the same meaning. Different words with the same meaning can be used to “intensify” an idea, usually making sentences longer.” - Ebtesam M.

For Arabic-English translation, a single English word from an English dictionary often can’t replace an Arabic one.

“The translator may need to explain the meaning of the Arabic word using one or more sentences in English. This happens frequently when working on Islamic terms. For example, ‘Hoor Al-Ayn’ is an Islamic concept in which ‘Hoor’ is the intense whiteness and deep blackness of the eye, and ‘Al-Ayn’ means ‘eyes.’ The whole term (‘Hoor Al-Ayn’) refers to pretty virginal women with beautiful eyes who will be a reward for martyrdom or doing good works in life. Here, the translator’s job is not limited to interpreting the meaning literally but to explaining what facts are behind it.” - Ebtesam M.

That’s why many translators offer transcreation in addition to their translation services. Transcreation focuses on maintaining the meaning of a phrase rather than translating it to the letter. This allows translators to inject their creativity and cultural knowledge to create content that resonates with a new audience.

If you’re looking to test out how Arabic will change the length or formatting for your user experience, classic machine translation tools like Google Translate or Microsoft Translator may not be your best bet. Instead, try these specialized Arabic-to-English apps:

...of course, we recommend Smartling for all of your Arabic-English translation needs.

Focus on creating localized experiences for your customers, and we’ll take care of the rest. No need for Google Translate or machine translation — whether you’re translating into French, Spanish, Italian, Portuguese, Russian, Japanese, German, Dutch, Polish, Czech, Danish, Finnish, or another of our many languages offered, we have you covered.

Our suite of translation management technology and language services eliminates manual translation efforts and black-box project management, helping you create high-quality translations while lowering your costs. You’ll be able to directly communicate with our professional translators on your translation team, like Ebtesam M.